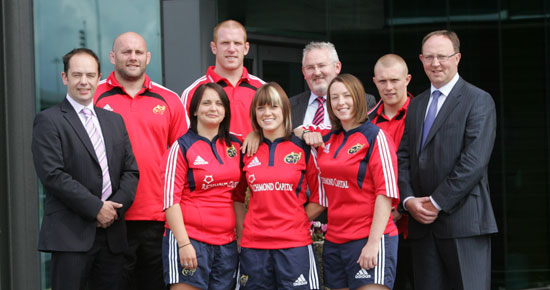 Richmond Capital recognise the success the Munster Women’s Team have achieved, and have committed their support to the squad, as they continue their preparations in the hope of claiming their third successive Interprovincial Title.

Speaking at the launch, Richard Collins, CEO of Richmond Capital, said, ?Richmond Capital is proud to be associated with the Munster Women’s Rugby Team and look forward to working with them, and to another highly successful 2008-09 season. As lead Sponsors of the team we are delighted that our involvement will provide valued support for the entire squad of players and staff?.

Munster Rugby’s Paul O’ Connell, John Hayes and Keith Earls were on hand prior to departure for Edinburgh to show their support to the Women’s Team, and wished them all the best in their Inter-Provincial campaign, which kicks off Saturday September 13th against Ulster in Ravenhill.

Commenting on behalf of Munster Rugby, Glyn Billinghurst, Sales & Marketing Manager, said ?We are very pleased to have Richmond Capital as the sponsor of the Munster Women’s Senior Team, it is great to have another Munster based business on board as a sponsor, further building the regional bond between the Munster brand, business and a very successful women’s team?.