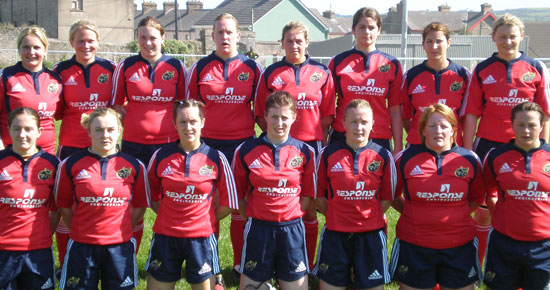 A lot has changed over the past few years and it’s Munster and Leinster who now dominate this competition. The striking thing about Munster was how fit and sharp they looked up front as their forwards were quick to every breakdown and their loose play was excellent with players like Aoife Mahony, Deirdre Scannell and Kate O’Loughlin benefiting hugely from the open style of play their team employed.

The first score came after just ten minutes when outhalf Nicole Fitzgerald did very well in a packed inside channel to dummy her way past a few defenders and crash over. She converted herself and it reaffirmed Munster’s strong start in which they owned the ball. Munster’s backline suffered from a little hesitancy going forward but some good linking play from Karen Fitzpatrick and Laura Guest on the wing allowed Deirdre Scannell dive over for a second score.

Guest showed fantastic pace minutes later when she broke a tackle and offloaded to the hard-working Mahony, who had a superb first half. Mahony brought play right up the line where she laid it off to Louise Beamish as Munster began to cut loose and score some good tries. In the middle Helen Brosnan did well with limited possession and before the half ended another impressive maul by a dominant Munster pack saw Mahony stretch for the line and come up with a try which saw the hosts lead 24-0 at the break.

Fitzgerald opened the second half with a penalty and while Ulster did try and come back, there was little way through for them. Irish fullback Joanne O’Sullivan was their best attacker and though she got little ball, she hit some fantastic lines and did her best to go forward. Outhalf Heather Thominson distributed well but Munster’s backrow foraged well on the ground and the visitors turned over too many times.

A try came for Carol Murphy, came after a stalemate period during which both sides made several changes but two final scores came in the final minutes for Munster with Beamish the benefactor of a block down out wide and captain Marie Barrett diving over after a good drive. Munster will be delighted with a convincing win on the opening day. Most pleasing for them will be the excellent work rate of their pack, whose set pieces were almost immaculate and players like Mahony and O’Loughlin really made their mark.

The backline, a relatively new-look one for Munster, didn’t do anything too exciting but they made few mistakes either and the home team can be pleased ahead of their next game in two week’s time against Connacht.