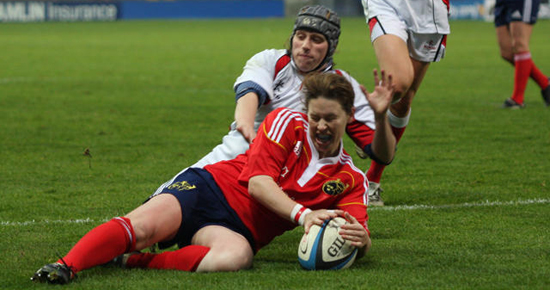 The Munster Rugby Women’s Team have been crowned IRFU Inter-Provincial Champions for a 4th consecutive year.

The team coached by ex Irish Internationals Fiona Steed and Sarah Jane Belton have gone yet another season unbeaten in the Interpro series. They are also unbeaten in the rugby stronghold of the South of France having opened the tour by beating their hosts Villelongue 5-38 and also going on to defeat French Division 1 champions Montpellier 0-13. Having returned back home the outfit opened the Interprovincial series by creating history in being the first ever Munster Women’s team to play in Thomond Park and went on to beat Ulster 46-0. The team continued with their winning ways with a 9-6 victory in a hard fought match against Leinster. The final pool game of the series was away to Connacht with the women winning 0-25.

The squad who have been training since July, had the disappointment of the finals being postponed at the end of November due to Donnybrook pitches being flooded, however this was not to hold them back with their preparations of taking on Leinster in the finals once again. Following the spell of snow and frost the finals due to take place in January were cancelled and the Munster girls retained their title for the fourth consecutive year.

The ladies will be presented with the IRFU Inter Provincial trophy in the coming weeks, an accolade that is well deserved for a squad of hard working players and coaches alike.