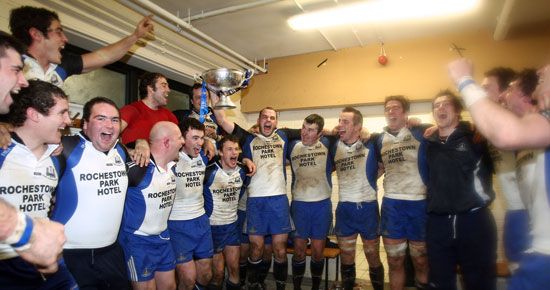 The AIB All Ireland Cup heads to Temple Hill, as Shannon move into top spot in Division 1A and Midleton move a step nearer promotion from Division 3.

Cork Constitution made amends for last seasons defeat in the AIB All Ireland Cup Final with a great come back to beat Garryowen 15-11 at Dubarry Park in this season’s decider.

Things did not look good for the Cork side at the half time whistle as they trailed 11-5 and were reducded to fourteen when second row Ian Nagle was shown a red card.

Richard Lane opened the scoring for the Cork side with a try on fourteen minutes when a long pass from Scott Deasy sent him over the line.

Four minutes before the break, Garryowen were ahead thanks to two penalties from Conor Murray. Than deep n first half injury time Mike Sherry got in for a try from a ruck that also led to the dismissal of Nagle.

Despite the odds Con’ controlled the game in the second half and a super try by out half Daragh Lyons ten minutes from time changed the game. He spotted an opening and squeezed over to touch down and Deasy Converted to put his side a point in front.
On the stroke of time Deasy kicked a penalty to complete the scoring.

Shannon are the new leaders in Division 1A as they picked up maximum points with a 27-16 win over St. Mary’s College at Templeville Road.

The sides were level 10-10 at half time with Fionn McLoughlin scoring two tries for the visitors. Tries early in the second half by David Quinlan and John O’Connor secured the bonus point for Shannon and Tadhg Bennett’s two conversions put the game beyond the home side. Bennett added to their tally with a drop goal.

Dolphin have moved up to third place after their 17-0 home win over Clontarf. Tries by Andy O’Driscoll, James Coughlan and Paul Hurley and a conversion by Cormac O’Flynn was enough to give the Cork side the points.

U.C.C.’s hopes of promotion from Division 1B were dealt a big blow at Eaton Park when Ballymena defeated them 19-10. The students trailed 13-0 at half time and a much improved second half which yielded tries by Brian Dennehy and Brian Derhamsaw the m close the gap to three points but a penalty from David O’Hara and a drop goal from full-back Roger McBurney denied the students a losing bonus point.

Young Munster’s went back to the top of Division 1B for twenty four hours after their 13-12 home win over Dungannon. Two first half tries by Alan Kingsley and Matthew Costelloe had the Cookies 10-6 in front at the half way mark. Kingsley added a penalty to move his side 10 points clear of third placed U.C.C. with four games remaining.

Old Belvedere’s 33-12 home win over Buccaneers saw the Anglesea Road side go back to the top.

Bruff’s 32-13 away win over Terenure College at Lakeland as moved the County Limerick side into second place in the Second Division.
John Shine and John Carroll scored two tries each for the winners and David Gardiner got one. Philip Moloney kicked a penalty and two conversions.

Leaders Lansdowne continued their unbeaten run with a 52-18 victory over Thomond at the RDS. Warren Kelly and Leonard Slattery scored tries for the Limerick side and Declan Cusack kicked two penalties and M Long also added a penalty.

Old Crescent eased their relegation worries with a 35-3 win over bottom side Greystones. Mark Ryan scored two tries for the winners and William Hanley and Bill Leahy scored a try each. Brian O’Shea kicked three penalties and three conversions.

Highfield are back in the relegation battle after their 25-11 defeat by UCD at Belfield. Dave Kelly scored a try for the Cork side and Dave O’Brien kicked two penalties.

Despite dominating for long periods Clonakilty had to play second best on the scoreboard as they lost to Corinthians 17-11. Leonard Harte scored a try for the visitors and Kurt Morath kicked two penalties.

Midleton still remain unbeaten in the Third Division as they defeated Barnhall 16-8 at Parsonstown. Barry Sweeney and Junior Sifa scored tries for the East Cork side and Jeff Hitchmough kicked two penalties.

Sunday’s Well got back to winning ways with a 14-9 victory over Navan at Musgrave Park. Eamon Murphy scored a try for the winners and Danny O’Shea kicked three penalties.