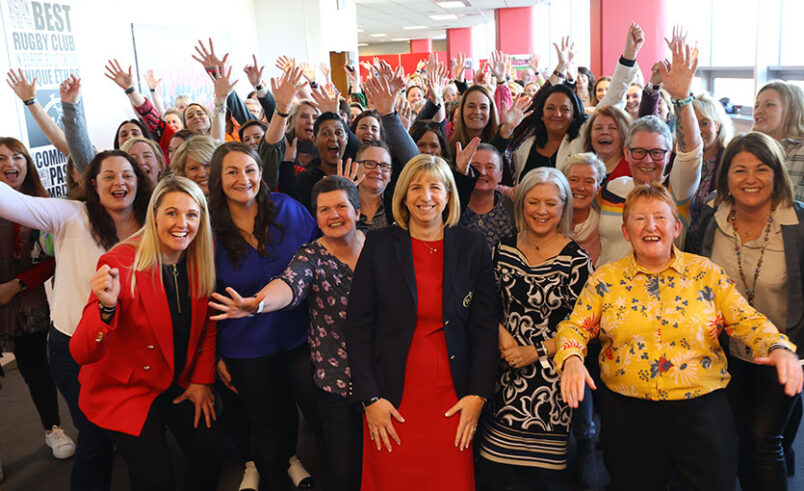 Ahead of International Women’s Day this week, Munster Rugby held a special event, ‘Celebrating Munster Women Past and Present’, in association with Bank of Ireland, Diageo and Keanes at Thomond Park Stadium on Saturday.

The event was a celebration of all of the women who put on the famous red jersey over the years since the first Munster women’s team took to the field in 1996.

120 players from current and past Munster sides were in attendance and they all received a commemorative Munster Rugby pin which was supplied by Keane’s Jewellers.

The event also featured a Q&A element with former players Regina O’Reilly and Olivia Brown, the two women tasked with compiling a database of all of the women who have represented Munster since 1996.

During this part of the event, there was video message from former head coach Rohan West while former Interpro coach Dan McCarthy also recalled his memories of taking charge of the team. There were also words from Rosemary Dillon, who scored the very first try for the Munster women’s side and Fiona Steed, who captained Munster to three consecutive interprovincial series wins.

Wendy Keenan said: “It’s really important that we acknowledge all these players that have played for Munster and they are a part of the history of Munster Rugby.

“They are our leaders for the future and they have been our leaders in the past. If we look at the 20×20 campaign in terms of ‘Can’t See, Can’t Be’, Munster Women have played a key role in relation to leadership at all levels not only at Munster Rugby but also at the IRFU level.”

Fiona Steed said: “This is just the most amazing celebration of women’s rugby players past and present. A huge gathering coming from 1996. There’s girls here that I haven’t seen for years so it’s a celebration of all of us for what we did at the time and what we continue to do. Just a huge thanks to Munster Rugby and all of the sponsors for getting behind it.”

Watch our video from the event below.

Please find a selection of photos from the event below: