Munster Women Back in Action 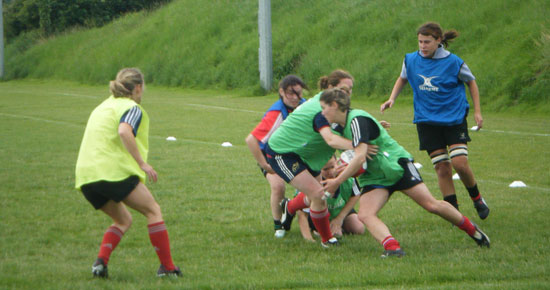 The Munster Rugby women’s season kicked off last weekend with an open trial session in Fermoy RFC on Saturday and Sunday.

Former Munster women’s assistant coach Fiona Steed takes over as Head Coach for the 09/10 season and is joined by her former Ireland teammate Sarah Jane Belton in the coaching team.

In total there were over forty players in attendance at the open trials and each were put through their paces as they took on various aspects of the game such as team play, fitness and unit skills.

Whilst the core Irish players were at fitness testing in Dublin on Saturday, they joined in with the group on Sunday under the watchful eye of Steed, Belton and new strength and conditioning coach John Canavan.

The squad which is due to be announced later this week, will travel on a pre-season tour to France at the end of August in preparation for this year’s Interprovincial series. The Munster women will take on French side Villelongue and French Champions Montpelliar in the preseason games.

The Interprovincial tournament takes on a new structure for the season ahead with the first interpro game being played on October 17th, following the opening four club rounds. The subsequent interpro and club games will be played on alternate weekends up to the middle of November when the finals will take place in Leinster.

Draw for Munster Junior Cup is made