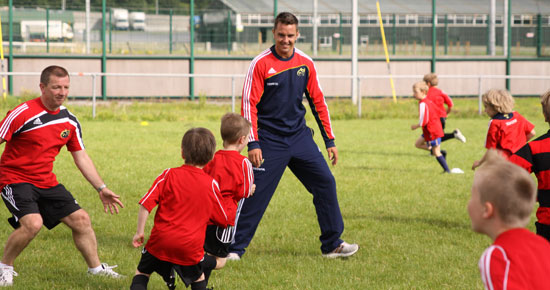 It’s the halfway stage of the 2009 Munster Rugby Summer Camps and the fun filled rugby activities are as popular as ever.

It’s week four now and the camps have already hit Bandon, Garryowen, Abbeyfeale, Colaiste Stiofain Naofa, Ennis, Bruff, Killarney, Cobh, Ballincollig, Nenagh and Midleton at this stage, with a great turn out at each camp.

Over six hundred children have attended the camps in the first three weeks and excitement levels rose when the Munster players made guest appearances at the different venues. Players such as Barry Murphy, Ian Dowling, Paul Warwick, Denis Leamy, Peter Stringer, John Hayes, Niall Ronan, Tony Buckley, Denis Fogarty and James Coughlan have all paid a visit to one of the many camps throughout the province.

The Munster View was on hand recently when Barry Murphy and Ian Dowling paid a visit to the camp in Abbeyfeale RFC, check out the video here.

There’s still plenty of fun to be had before the summer ends and who knows where the players will visit next……. Make sure to sign up to one of the remaining camps in the following venues and don’t miss out on any of the action!

AIB League Fixtures have been announced