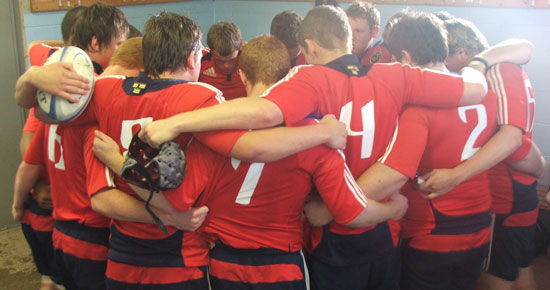 The Under 19 Combined Squad, who have been in pre season now since the start of July, have completed a series of challenge games over the last few weeks in the build up to their Interpro campaign which commences next month.

First up they played the Garryowen U21s in Dooradoyle on Sat 15th August. As a first outing for both sides, the game was played in three segments lasting over 80 mins in total. It gave Head Coach Greg Oliver and his coaching team their first opportunity to have a look at the squad and the possible combinations available to play.

After an expectedly rusty start, Munster settled into the game extremely well and played some very good rugby. Outscoring their opponents by five tries to one, some of Munster’s open field running was of real quality for the first outing of the season. Particularly pleasing was the side’s defensive effort, reflecting the work done on the training pitch in the previous weeks. Scorers included: Try: Cian Bohane (2), Adrian Doyle Con: Ben Sargant (2), Jonathan Holland Pen: Ben Sargant.

This game was followed up with a challenge match against the Munster U19 Schools in Fermoy last Monday the 24th. Despite having five of the squad away on holidays, and another five out with various injuries, several players in the combined squad took the opportunity to send a clear message to the coaching staff, by putting their hands up during the game.

Played over three segments, under lights in Fermoy, the combined squad showed terrific hunger and commitment in playing the Schools side. Despite struggling at first phase, particularly in the lineout, the forwards really got stuck in, and in particular generated some great forward drives off turnovers. The defensive effort was again top drawer, shown by strong rearguard action in the last few minutes. Scorers for the combined squad: Try: Cian Bohane, Jake Considine Con: Ben Sargent (2), Pen: Derry O’Connor

It has to be said that facilities in Fermoy RFC for a match under lights were first class, and a note of thanks to the Fermoy grounds man Eamon for all his help on the night. Also, a word of thanks to all the referees and to ULBohemian RFC for the use of their jerseys!

Schedule over the next couple of weeks: