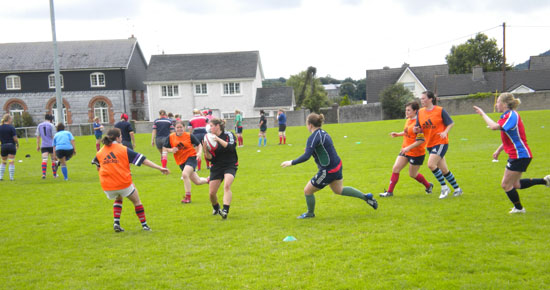 The Munster Women’s squad set off for France early this morning from Shannon to embark on their first pre-season tour.

Coaches Fiona Steed and Sarahjane Belton announced the team captain and vice-captain ahead of the team’s tour to France. Current Irish Women’s Captain Joy Neville who plays her club rugby with UL Bohemians has been named captain for the season ahead, and Ireland and Highfield centre, Helen Brosnan, has been named vice captain.

The team who are basing themselves in Parc Ducup on the outskirts of Perpignan, play two challenge games in Stade Olympique Villelongue over the weekend. The first match will see Munster take on French Division 2 finalists Villelongue tonight, followed by French Division 2 Champions, Montpellier, on Saturday night.

Speaking ahead of the tour, Munster Women’s Head Coach, Fiona Steed said: “We have had a really tough selection process this season due to the high standards set by the players since the first trial date in July. This season we have lost experienced players such as Marie Barrett, Lynne Cantwell, Eimear O’ Sullivan and Deirdre Scannell, however, there is a huge level of strength and depth to this years squad."

"To date, training has been going very well and although we have cut down the number of session the intensity and work rate throughout the session have increased. We are now at the half-way stage in our pre-season preparation for this years Inter-Provincial Series and the tour to France is crucial to aid our preparations to begin our campaign to defend the Women’s Inter-Provincial Title. If last season is anything to go by, it will undoubtedly be a tough battle but one that we are striving to come out on top.”

Success in Scotland for Munster U20s