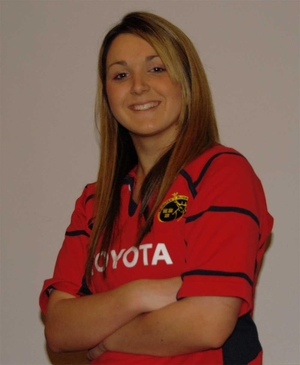 Tipperary town girl, Louise Egan, has been announced as the first ever
Captain of the Munster Under 18 Girls’ rugby team. This is the first
Munster team for girls at the under 18 age grade and the resources and
energy of the Munster rugby establishment, male and female, have been
put behind this new and exciting team. The Munster Women’s Committee and
the Development Office of Munster Rugby are working closely to build the
strongest team possible.

Recently, forty nine players from seven Munster Under 18 League teams
took part in Munster trials in Fermoy. The top thirty players selected
from the trials have been training since then and the squad is soon to
be reduced to twenty two players ahead of their first game, against
English champions Worcester on April 4th.

Louise reckons that the Worcester game will be a big challenge for the
Munster girls. "It will be a huge step up for most of the players, who
have mainly been playing for their club sides in the Munster League.
Playing the English champions is going to be a tough assignment, but we
want to keep the Munster tradition of not worrying about who we are
playing against and concentrate on our own game".

Louise is playing with Tipperary side Clanwilliam for her fourth season
and is Captain of her club side. "I’m thrilled to be Captain of Munster.
The name of Munster Rugby is huge everywhere and we certainly want to
play our part in keeping it that way. We are all training hard and we
will do our best". The Munster training squad is made up of players from
Clanwilliam, Clonmel, Thurles, Shannon, Fermoy, Mallow
and Corca Dhuibhne, from the Dingle Peninsula in Kerry.