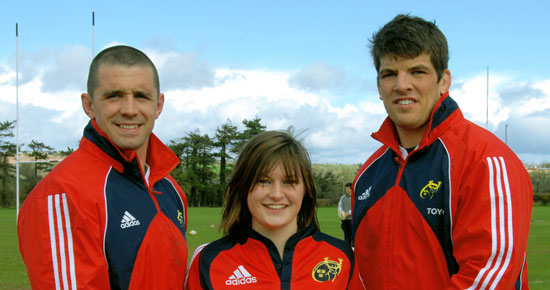 Anna Caplice has been a lifelong Munster fan, and now has the chance of emulating Messrs Quinlan and O'Callaghan in representing her country at a World Cup

Munster stars Donncha O’Callaghan and Alan Quinlan were introduced recently to new Captain of the Munster Under 18 Girls team, Anna Caplice to mark the start of this season’s campaign by the newest team in the Munster rugby family.

Both Donncha and Alan were quick to wish the girls the best of luck and spoke with Anna about the enjoyment they feel representing Munster.

Anna is a veteran of the inaugural season last year for Munster under 18 girls and plays with Mallow RFC, where she is also Captain. Anna said she is really looking forward to their games, as are the rest of the squad.

Munster play top English side, East Midlands in Cork on Sunday 6th April . They will follow with games against Ulster, who competed last season, and Leinster, who are lining out for the first time this season. The introduction of inter-provincial games for girls has resulted a dramatic boost in the number of girls playing rugby.