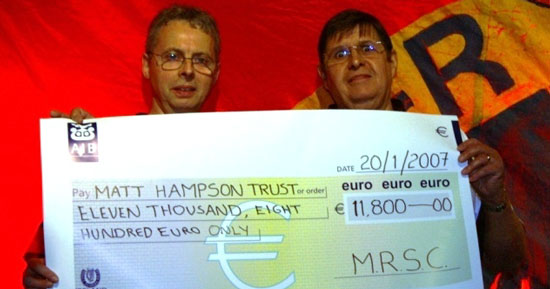 The Munster Rugby Supporters Club committee were honoured to hand over a cheque for €11,800 to the Matt Hampson Trust last weekend, prior to the Munster v Leicester Tigers game at Thomond Park.

The money was raised from 2 fundraising sources. Steve Garvey, a Munster supporter, living in Leicester, approached the committee, with 2 tickets given to him by his mate Ernie, landlord at the Blaby Arms in Leicestershire. The committee used the tickets as prizes in a raffle for the Matt Hampson Trust, where members of the MRSC bought raffle tickets on-line for €5.
In 5 days, the total raised was a phenomenal €10,800 for the Matt Hampson Trust.
Matt Hampson, is a Leicester player who suffered a serious neck injury last March, whilst training. He currently cannot breathe unaided and is paralysed from the neck down, and it was decided last September, that he would be the designated charity for our Pre-match Lunch.
Added to the €1,000 raised as part of being our designated Charity for the Pre-Match Lunch, Ger Quinn on the left presented a cheque for €11,800 (£7,680) to John Griffiths on behalf of the Matt Hampson Trust.
The Munster Rugby Supporters Club would like to thank its most sporting and giving members for such overwhelming support for a most deserving cause which has touched the hearts of all rugby supporters. We hope that Matt continues to succeed on his very challenging road to regaining independence.
Also, during the Pre-Match Lunch, a cheque for €2,000 was presented to Mick Quinn, of the IRFU Charitable Trust, as a result of commemorative Pin Badges sold to members during the season.