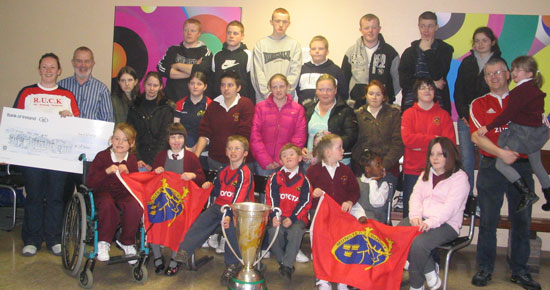 The Munster Rugby Coaching and Development Office were recently involved in a visit to the Midwest School for Hearing Impaired Children on the day when €17,000 was presented to the school by Stryker.

The Heineken Cup recently visited the Midwest School for Hearing Impaired Children on the day that Stryker factory presented a cheque for €17,000 in aid of the school.

Organised by John Moore, some of the money was raised by making and selling calendars which featured the students from the school as part of the Stryker firefighting team together with the crew from Stryker.

One of the workers from Stryker, Tony O’ Grady, shaved off his beard after 36 years.

This event took place at Dolans on Friday night the 23rd of March. There was a rugby match between staff on Friday at Stryker which also generated funds.

Information on the school can be found at www.limerickschoolforthedeaf.com.