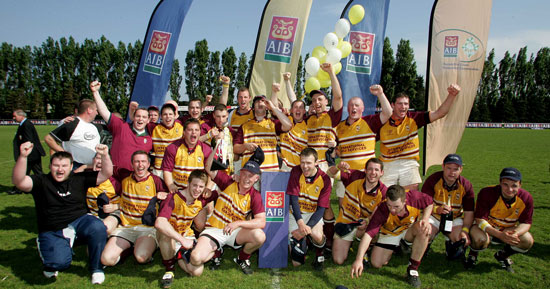 Tries in each half from hooker Cathal O’Regan and full-back Brendan Deady saw the Limerick men, who are only in their third season in the league, take the silverware. A boisterous crowd, boosted by four bus-loads of Bruff supporters, were treated to a ding-dong battle with O’Regan’s 29th-minute try helping the Limerick men lead 13-9 at half-time. Wanderers, who topped the league table ahead of Ballynahinch, lived off the boot of out-half Billy Tracey who landed four penalties. But Deady’s intercept try, five minutes from time, sealed a famous day in the short history of Bruff RFC.
Having missed out on promotion and searching for their first win over Wanderers in three meetings, Bruff looked the more motivated side in the opening skirmishes and they did well to contain the Dubliners’ maul attacks.

Tracey did put the table-toppers in front with an 18th-minute penalty, but Wanderers’ lead was a short lived one as just minutes later, referee Colin Stanley pinged Andrew Spraggon’s side for killing ruck ball and Cahill sent over his first penalty. Coming up to the half-hour, Bruff stole into the lead when O’Regan found lock Dermot Murnane at the lineout and the busy hooker took on possession at the back of a maul to crash over for the game’s opening try. Cahill converted and added another penalty for a 13-3 advantage before Tracey got Wanderers back within range, before the break, with penalty strikes after 37 and 39 minutes.

Wanderers began to dominate early in the second half but crucially they could not make any decent dent on the scoreboard. Their impressive back row unit of Kolo Kiripati, Emmet Wardell and Pom Simone came to the fore, but Tracey’s fourth penalty, notched in the 63rd-minute, was all the Dubliners had to show for their second half efforts. Tracey’s kick came after Bruff flanker James Taylor had been binned for a professional foul and the Limerick outfit looked to be waivering with their lead chopped down to 13-12.

An exciting finish lay ahead as Bruff shunned a chance for Cahill to bisect the posts with a place kick and opted to keep the ball with their forwards. They looked to have carved out a try-scoring opportunity when Finbarr Hogan was in space, but prop Gearoid Ryan failed to get a pass away and Wanderers regrouped. They managed to snaffle back possession but scrum half Brendan O’Brien took a dangerous option when he broke off a ruck close to his own try line and he paid the price when his pass was intercepted by lurking Bruff captain Deadly who gleefully touched down to crown a deserved win for his hard-working side.