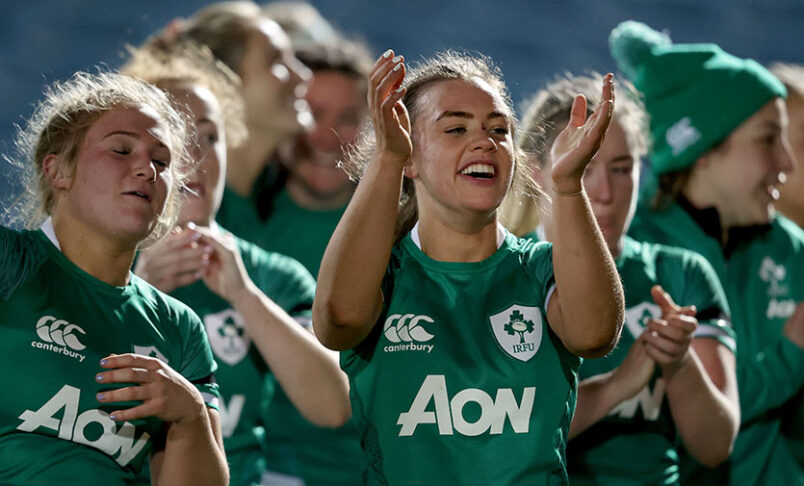 “Emotional” is how Grace Kearney described her feelings as Maeve Óg O’Leary replaced Ciara Griffin in the second half of Ireland’s 20-10 win over the USA on Friday night to earn her first international cap.

O’Leary’s debut is the latest milestone on what has been a six-year journey for the Ballina, Co. Tipperary native. The path travelled has seen the 21-year-old take detours into other sports in which she also excelled. However, the lure of the oval ball was ever-present and through O’Leary’s dedication, hard work and commitment, she has reached the international stage – just six years on from when she first took up the sport. 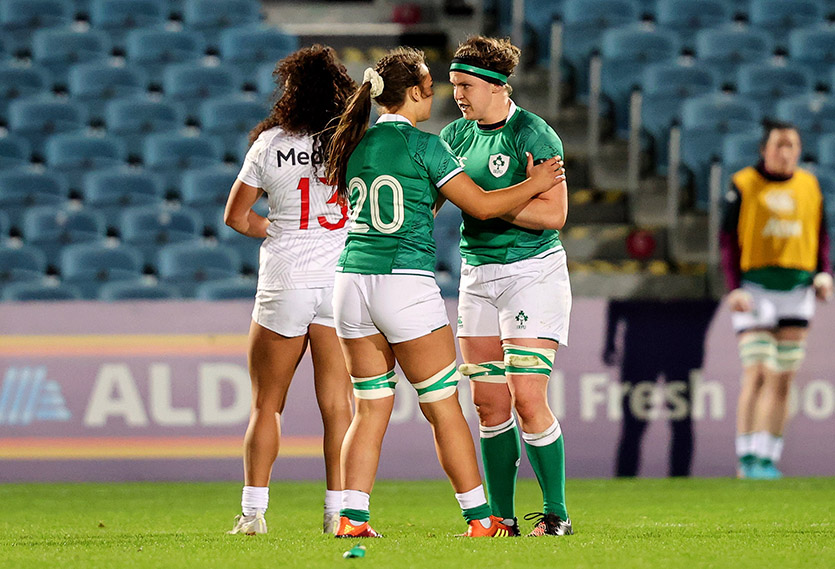 Kearney’s emotion at seeing O’Leary run out onto the pitch for her debut is easily explained. Not only a close family friend of the O’Leary clan but Kearney was the one who introduced girls’ rugby to St Anne’s Community College in Killaloe in her role there as a teacher at the behest of Maeve Óg and her friends.

“Her and a few of her friends came to me and said they would love to have a girls team in the school. After begging me, well, it didn’t take too long but after begging me for a while, I said, ‘Yeah, you know what? Let’s give it a go and let’s get a girls team together.’

“So we started a girls team in 2015 in the school and then I went out in the club (Ballina-Killaloe RFC) with them as well and started coaching them in the club. Literally, it took off and it just went from there.”

Kearney, who is a former underage player with Munster, admits that O’Leary’s passion and enthusiasm for the sport stood out in those early days. This, of course, is not too surprising considering her brother, Shane, is a professional rugby player and fellow international having represented Canada on 13 occasions.

“I obviously played myself when I was younger and I kind of felt there wasn’t as much available to girls in terms of rugby as there was for boys,” Kearney said. 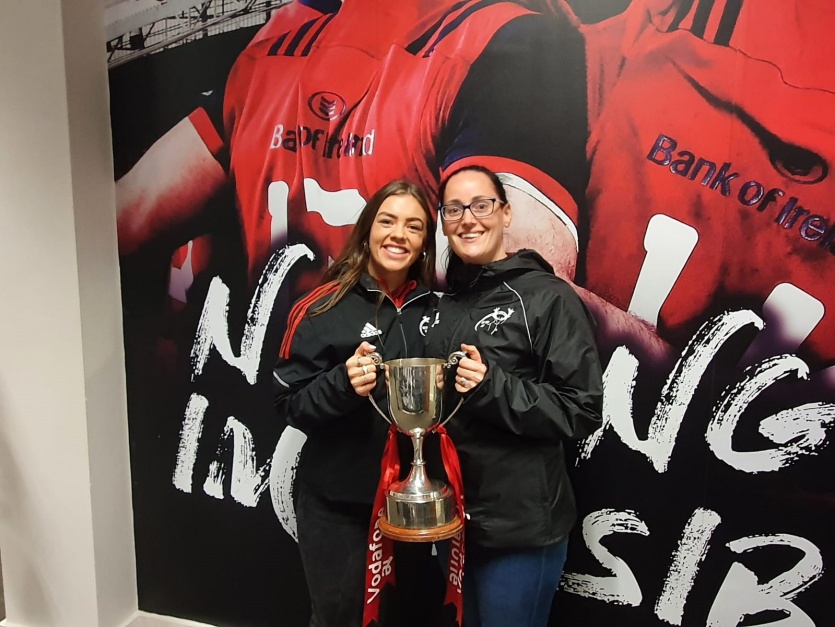 “It was always something I wanted to do so when Maeve Óg was the driving force of it in the school and when she suggested it, I said ‘Yeah, let’s go for it.’ It was amazing.”

“She stood out from the start but it was her passion and her enthusiasm that just overwhelmed me. It was something that I had and I thought, ‘Oh my god, this girl has the same kind of passion and want as I do.’

“That really stood out to me as well that she was really determined, she was really hard-working. At training, she was getting everybody going. She’s a great leader in that sense and she captained our club team as well because of that leadership quality that she has. She’s fantastic.”

O’Leary’s work-ethic and determination are traits which are frequently mentioned by those who have had the opportunity to coach her.

Those characteristics were ever present during those fledgling years with the oval ball as she had to balance rugby with not just school work but other sporting endeavours including camogie and softball, the latter of which she represent Ireland at the Junior World Championships in Florida.

“She was balancing several sports together because she was playing camogie at a high level and she was playing other sports (softball) with me. It was just the hunger and the drive she had. She’s very hard working, she’s very determined. If she sets her mind to something, she goes 110% to get it and to achieve that goal as well.

“When she made the Munster U18s squad for the 7s and for the 15s, I used to bring her to training. We’d leave school, go down to training with her and another girl in the school and she used to do her homework in the car as we were driving down.” 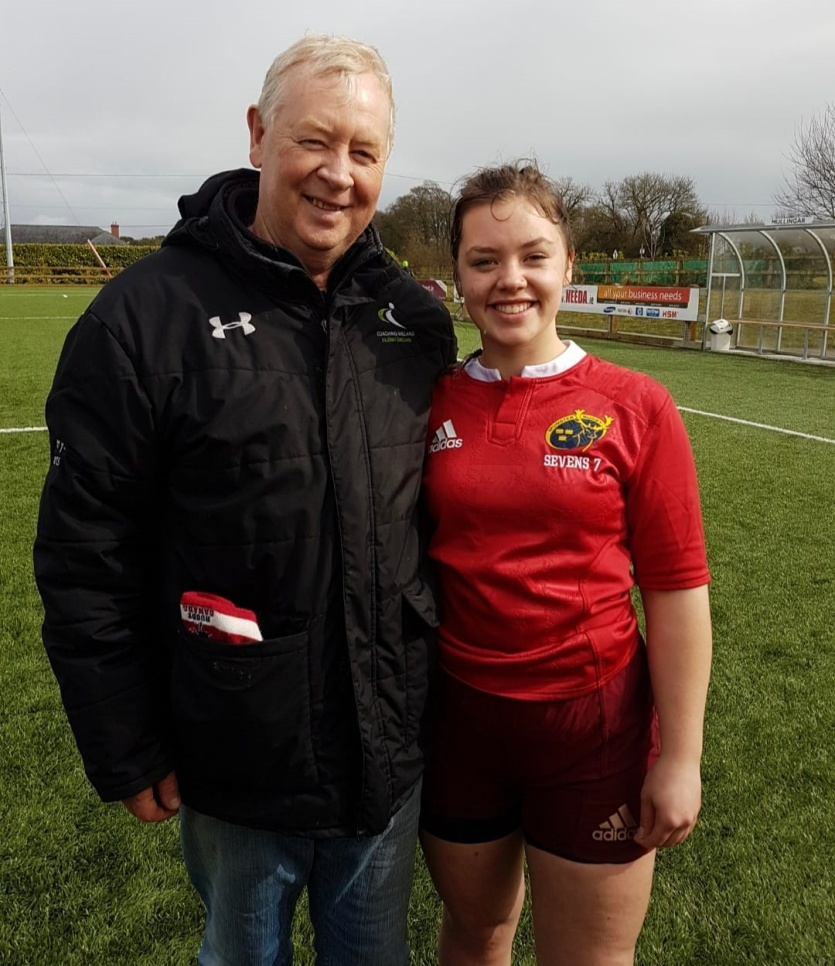 O’Leary’s competitiveness and strive for perfection is best summed up in another anecdote from the back-row’s former teacher and coach.

“In 2018, Maeve Óg got the Student Of The Year (award) in school and the funniest part of it was I remember her saying to me that she was disappointed she didn’t get the Sports Person of the Year. That just shows you how much sport means to her. Although she got the overall student of the year, she was disappointed that it wasn’t the overall sports person of the year. But that’s just who she is.”

Maeve Óg’s aptitude for rugby saw her represent Munster in 7s at U18s level in 2017 before making the 15s squad for the 2018 U18 Girls Interprovincial Championship.

“I would have had experience with her with the U18 7s. I would have also refereed a couple of blitzes that she would have been in with her school team. So that was my first experience of her. She was full of running. That’s what I remember of her, mad to work. 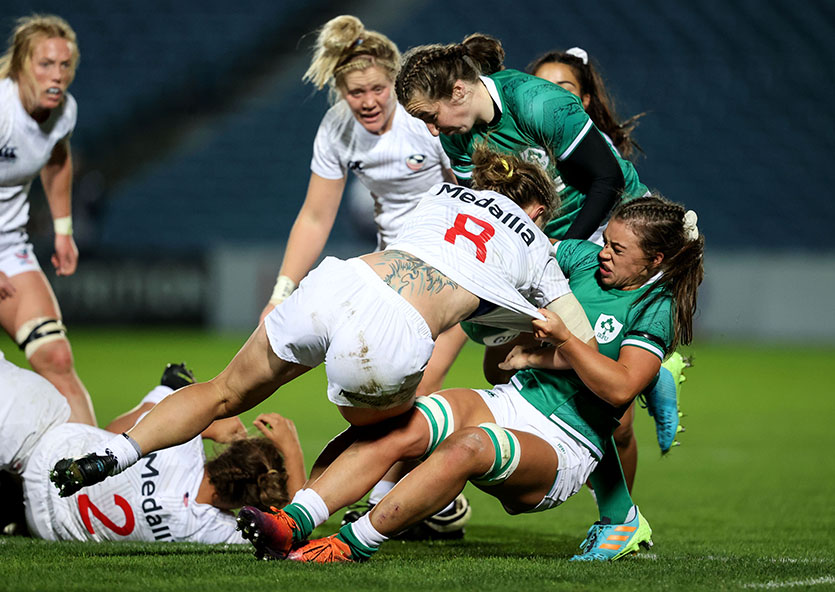 “Really good attitude but she was a little bit raw in the detail of the game. That was probably how I experienced her in the Munster U18 7s programme. I think she just missed out on some of the games because for all her athletic ability, she was just so new to the game, she hadn’t been exposed at that level.

“I finished with the U18 Girls 7s then and my next experience of her was with the Munster Women’s setup and she was like a new person.”

In the years after underage rugby, O’Leary attended college in DCU and started playing her club rugby with Blackrock RFC. It was also during this time that O’Leary made a positional switch to the back-row after playing the majority of her rugby in the centre and on the wing.

Munster Rugby Women’s Development Officer Ken Imbusch first came across this rising talent from Tipperary in early 2019 and explains that O’Leary worked extremely hard on her skills and conditioning during lockdown to emerge an improved rugby player.

“She was given some things to work on, went away and spent the whole of lockdown working incredibly hard and came back a different human being. She made a massive, massive impact in the Interpros this year.”

“She really just got stuck in during lockdown. I know she had an international rugby player in her brother to help as training partner and she has another sister as well who’s playing for Shannon but yeah, massively self-driven, probably one of the most self-driven people I know.

“She did all the required training and development that goes with a positional change, it’s a massive change from going out on the touchline into the mix of it. She’s adapted unbelievably well and she deserves everything she gets because she’s put in the hard work to get there.”

Emerging from lockdown, O’Leary was a standout player for Munster as they secured the Vodafone Women’s Interprovincial Championship for the first time since 2017. 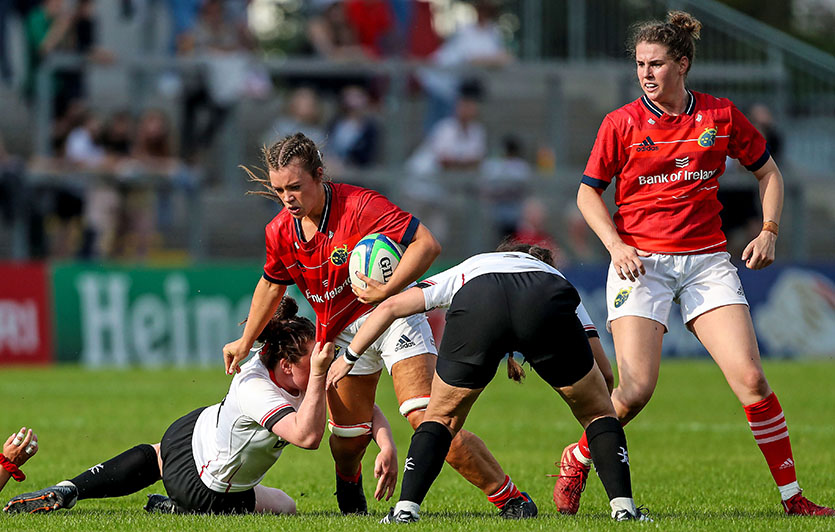 In his role as head coach, Brown outlines and explains the improvements which O’Leary made to her game and the reasons why she started each game of the Interprovincial campaign.

“She’s a serious athlete now and through the summer, she was always at the front in any of the running drills. On top of that, she’s also extremely abrasive over the ball too. I had experienced her as a centre but she’s obviously in the back-row now with good reason. Even though she’s not the biggest, her footwork on the ball carrying and her speed gets her into a lot of space. She’s so aggressive over the ball, she’s a huge asset.”

Brown continued: “She just kept wanting to get better. She was so coachable. She was mad to learn, she was always asking questions. She picks up off the other players. When you’re open to that kind of growth like she was, she’s only going to get better.

“And the fact that the athleticism was there and all the improvements around the general gameplay, it was a no-brainer for her really, she was in there. She was always a big voice at training as well, always really positive and encouraging.”

In early September, O’Leary was at Energia Park celebrating with family and friends as she put in an excellent performance to help Munster beat Leinster which clinched the 2021 Women’s Interprovincial Championship.

Just over two months later, those very same people returned to a venue just down the road to see another major milestone reached as O’Leary made her international debut at the RDS.

“I was sitting with her parents and her family,” Kearney said. 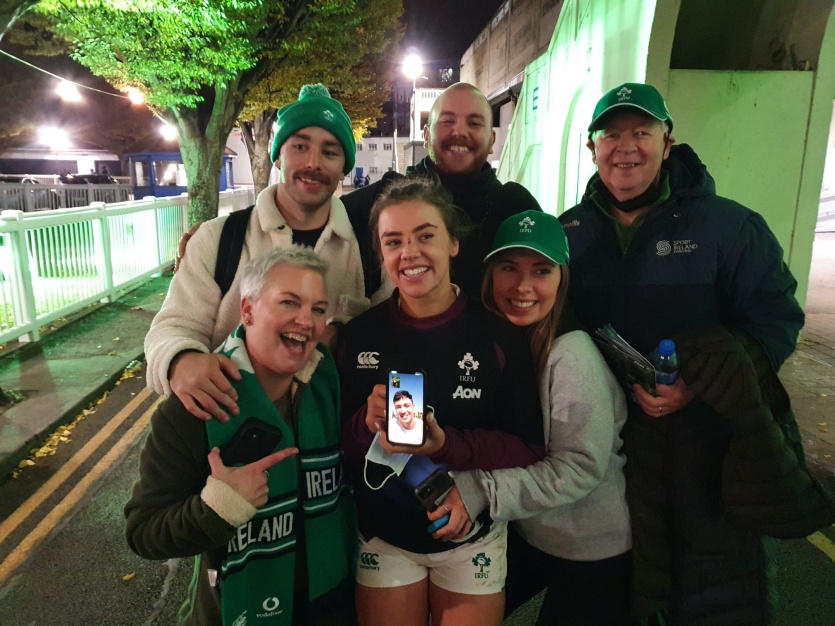 “Two of the kids in school had asked me would I bring them with me as well so myself, my husband and the two kids from school, all went up and we joined her family to watch her. Just watching her…even lining up for the anthems, for me, it’s one of the first players I’ve coached from a young age that is now playing for Ireland.

“I’m very close with her and her family. I was just so thrilled for her because I’ve known how much she’s wanted it and I know there were setbacks along the way. To live out her dreams and get her first cap for Ireland, it was just amazing.”

The pride is also felt by those in her school, hometown, club and the coaches who have contributed in some way over the years.

“It’s not just the on-field stuff that we can provide, it’s the off-field stuff,” Imbusch said.

“All of those added extras that we can provide, that people either do or they don’t. Maeve Óg is really good. It’s massively pleasing to see someone that invested their time and committed fully to believing what we put in place really and it’s after paying dividends now.”

“It’s not a huge place and for something like this to happen to such a small place, gives a boost to everybody. The girls numbers in the school and the club have increased year-on-year. So it’s just fabulous. And for them to see that we have our own player on the Irish team, it’s just phenomenal, it’s amazing.”

As Kearney explains, Maeve Óg’s journey is already having a hugely positive impact on participation in her former club and school.

With 54 girls from the junior and senior rugby teams in St Anne’s Community College set to descend on the RDS for Saturday’s clash with Japan, it’s safe to say that Maeve Og’s journey is already beginning to inspire others.

🗣️ It was a special night for Maeve Óg O’Leary on Friday, as she came off the bench to make her Ireland debut at @TheRDS 👇#NothingLikeIt | #IrishRugby pic.twitter.com/lzsqkJQASV