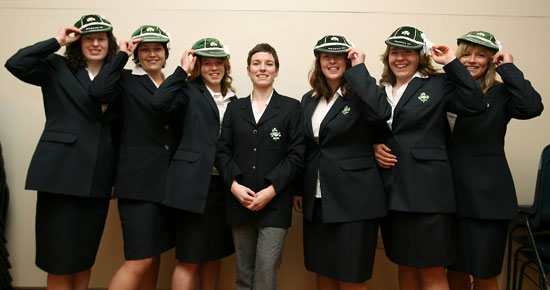 Ireland got their Six Nations campaign off to a flying start as they defeated Italy in Dublin on Friday afternoon.

On a bitterly cold day at St Mary’s RFC, Ireland struggled to score in the opening half despite having most of the possession, however they were immense in the second period scoring 19 unanswered points as they finally broke down the strong Italian reargaurd.
It took the hosts just five minutes into the second half to crash over for their first score when Ulster hooker Jess Limbert was on the end of a fine drive by the Irish pack. Ireland stayed on the attack and ten minutes later, second row Germaine Healy touched down again following more fluid attacking play.
Jo O’Sullivan, who converted Healy’s try, set up Ireland’s final score of the game on the 60 minute mark with a superb pass to flanker Sinead Ryan who dived under posts. Grace Davitt added the extra two points to wrap up the win for the home team.
The comfortable lead allowed Ireland coach John O’Sullivan to clear his bench with three new caps being won by Louise Austin, Niamh Briggs, Kate O’Loughlin.
Ireland will travel to France next weekend with confidence high after this win.

CBC and Castletroy Through to Semi Finals