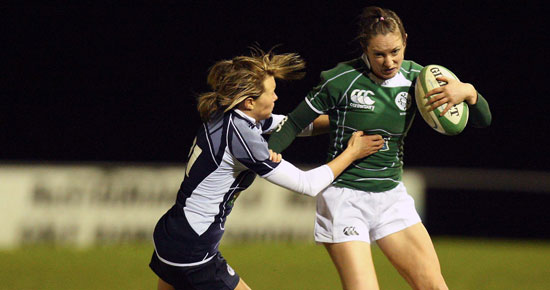 Ireland got their Six Nations campaign back on track Friday night when they ground out a solid 13-3 victory over Scotland.

The girls in green are now just one win away from their best ever Six Nations finish and they’ll look forward to the visit of Wales to Dublin in their next outing.
This was Ireland’s first win under lights this season at their favoured venue and just like in their win against Italy here on the opening afternoon, it was in the second half that Ireland really sparked into life.
Scotland played with the stiff breeze in the opening half and after a number of attacks the visitors registered the game’s first score with a penalty under the posts which Sarah Gill knocked over.
These points brought to an end, 30 minutes of exhausting play in the centre of the pitch with neither team able to break through.
Before the close of the half though Ireland had their riposte when outhalf Joanne O’Sullivan’s line break and determined sprint saw her burst through the defence to dot down and give her team the lead.
After the break, Ireland dominated play and forced a penalty which was converted by Grace Davitt within five minutes of the turnaround.
Ireland stayed on the attack for the remainder of the match with backrow Orla Brennan catching the eye as her side pressed hard for more scores.
Once again a fine pack effort helped Ireland gain crucial territory and it was on the end of one strong burst from the forwards that skipper Sarah Jane Belton latched onto the ball to dive over the line to secure the win with ten minutes to go.
Ireland now just need to beat Wales when they visit in the next game to assure them of their best placing in this competition and with two wins from three so far this year there will be plenty of motivation in the camp.
England play France today with the winners likely to be the eventual champions this season.