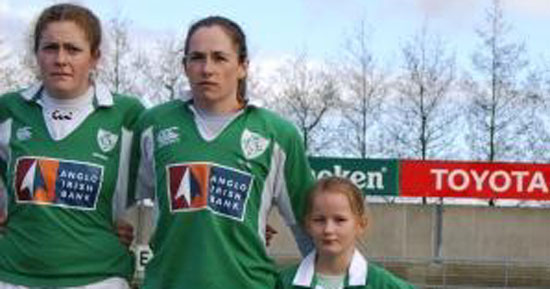 In the last representative fixture at Thomond Park, a rampant England notched up 32 points and kept Ireland scoreless in the Women’s Six Nations fixture earlier today

Having come within a score of World Cup semi finalists France in their last outing, and with the historic win in Croke Park yesterday, hopes were high that the Ireland Women’s team could take inspiration and cause an upset when they lined out against last year’s Grand Slam winners England in Thomond Park today. However, Ireland were unable to prevent a rampant England from coming out on top with a five try victory.

Ireland started brightly, with captain Sarah Jane Belton putting the ball in behind the England defence with superb accuracy to play for territory. However, England’s physical dominance all over the field and strength in the line out kept Ireland on the defensive. England’s first try came from winger Susan Day, who was on the end of a counter attack after a kick ahead by Ireland’s Grace Davitt. Daly beat two Irish defenders to score their first try which went unconverted. Shortly after, England missed a kick at goal after Ireland conceded a penalty for being offside, however, out half Katy McLean was on target after 24 minutes after a similar offence by Ireland to stretch England’s lead to 8-0.

Despite a heroic defence on their own line, Ireland couldn’t keep out Georgia Stevens who crossed the line after nine phases of play on the 36 minute mark. McLean’s conversion made it 15-0 at the break.

After the restart, some fantastic defensive work from Ireland’s Jo O’Sullivan prevented a sure try, however England’s scoring prowess continued with scrum half Amy Turner getting England’s third touch down after 43 minutes following a sniping pick and go from the base of an England scrum. McLean converted to by England 22-0 ahead. Turner was instrumental in setting up England’s fourth thirteen minutes later, with some great work at the breakdown saw her turn over an Irish ruck, and lightening hands to openside flanker Maggie Alphonsi, the England No. 7, who crossed the line. England’s final try came 25 minutes into the second half when Danielle Waterman crossed the line after a well worked move by the England back line, however, the conversion was missed.

The biggest cheer of the day came when Grace Davitt outflanked the English backline after great efforts at the Irish line out saw the ball spread wide to the pacy winger. Unfortunately the English cover caught Davitt, and Ireland’s hopes of a score to finish off a gutsy performance were not to be.

Best for Ireland included the Irish back row, with Orla Brennan impressing, who defended well and spoiled a number of England’s attacks. While the front five competed in the scrum, they struggled with the sheer physicality of the England side. However, the midfield of 10, 12 and 13 kept England on their toes with quick ball from the rucks giving them and attacking platform. With the England attack focused from out wide, Ireland’s back three, with captain Sarahjane Belton at full back, had plenty to contend with, and couldn’t stem the English tide. However, Belton led from the front displaying a tenacious work rate throughout.