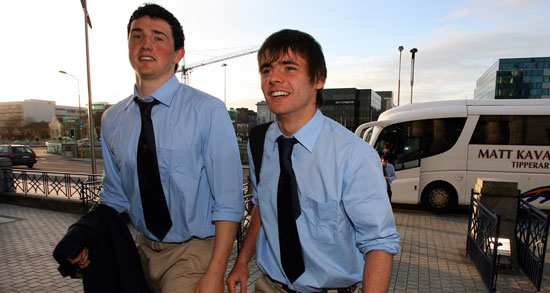 The Ireland U18 team finished on a positive note with a 17-15 win over Italy, while Wales and England claimed three wins out of three in their final games of the U18 Six Nations Festival

Ireland finished their U18 Six Nations campaign on a positive note as they won their final game of the festival at CIT.

Ireland had to dig deep for the victory as Italy led by three points with ten minutes to go but a try from prop Brian Cagney in the dying stages of the game was enough to secure them the win.

In a game which really only sparked into life in the second half, it was Italy who started better as they produced fine displays of off loading in the early exchanges with the likes of fullback Enrico Michelini and scrum-half Eduaordo Gori making some eye-catching breaks.

An early try for the visitors looked certain as Italy worked their way patiently up-field and number 8 Lorenzo Santelli had the line at his mercy only to drop the ball much to Ireland’s relief.

James McKinney missed an effort at goal as Ireland pushed up-field but the Irish were more potent in attack as the half wore on.

The home team did finish the half on a high however as their first score finally came from some excellent play up front.

A strong rolling maul saw Ireland win a penalty which they opted to put in the corner and when David O’Callaghan, captain on the day, won the ball in the air it was spun wide to Luke Marshall who did brilliantly to cut through and touch down.

Ireland though got off to the worst possible start after the break when they conceded a try second after the restart.

Italy won a lineout cleanly and from the resulting ruck, hooker Andrea Manici broke free to crash over to level the score.

Ireland recovered very well from their poor start as they did better with ball in hand and when David O’Callaghan took another clean line-out close to the Italian line the play was pushed wide again for winger Craig O’Hanlon who used his pace to round the defence and score.

McKinney added the extras to push out Ireland’s lead and things were looking up for the hosts.

McKinney worked the corners well with his boot but Italy dealt well on the counter attck and their hard work paid off when a superb break from centre Tommaso Benvenuti saw him cut right through Ireland’s midfield to dot down under the posts with just ten minutes to go.

Benvenuti converted his own scores and the sides were level.

Benvenuti then knocked over a penalty five minutes later to put Italy ahead but Ireland were not giving up easily they notched the winning try when and when Brian Cagney crashed over following a strong maul deep in the Italian half.

A stunning second-half comeback from Wales ensured that they finished their U18 Six Nations Festival unbeaten following this exiting game at Temple Hill.

Wales trailed 13-5 at the break but came out firing in the second half to stop France in their tracks and pick off some excellent scores as they ran out convincing winners in the end.

Simon King, the Wales head coach, said he was proud of what his side had achieved.

"It was a difficult first half for us because France played very well and worked the elements to their advantage because there was quite a stiff wind there. We told them to keep their heads and I thought they showed fantastic maturity to go out there and score some good points and in the end it was comfortable for us."

France, who leave Cork having lost all of their games at the festival, got off to a strong start as outhalf Amaury Geneste kicked two early penalties as he made the most of a strong breeze.

France were well organised and their attacking caused problems for the Welsh defence and Julien Petrod furthered the French advantage when he dived over to score a try which Geneste converted for a 13-0 lead.

Wales though made sure they didn’t slip too far behind when Scott Williams skipped through the centre to score a try just before half time.

That score gave Wales the belief they needed going into a tough second half and when outhalf Matthew Jarvis, who has been in fine form at this festival, added two penalties after the restart their revival began as they looked to attack with every opportunity.

Two tries killed France off when Tom Crandon and Adam Hughes got on the end of some stylish phases of play and with Jenkins kicking the extras it ensured that Wales go home with a perfect record.

England won their third match in succession in the final round of games at the U18 Six Nations Festival as they comfortably beat Scotland at Musgrave Park.

Both teams went into this game with two wins out of two under their belts but a superb first half performance meant England killed this game off early.

England were on the scoreboard as early as the eighth minute when hooker Jamie George crashed over following some good pressure up front.

George added another try before the break and with the extras from outhalf Rory Clegg England had established a comfortable lead at the break.

Scotland were a much more solid side after the break and their defence worked hard to get them back into the game.

Hooker Alun Hooker eventually got on the end of a phase of fine attacking play to get them on the scoreboard but England were too far ahead for the Scots to have any chance of winning it and Andy Forsyth had the final word for England after a terrific try from the backs which saw Sam Smith and Tom Homer assist in setting him up with the decisive score.

"We are all delighted to get the three wins and its been a fantastic experience for us and these young players. We want these players to develop and learn and they have done that as a squad and to see the sense of camaraderie and spirit that has come through has been fantastic. Today we beat a very good Scotland team and we stuck to the structures we have put in place all season and we were able to dominate."

Munster U18 Girls Ready For Action