Ireland Finish Third At The Europeans 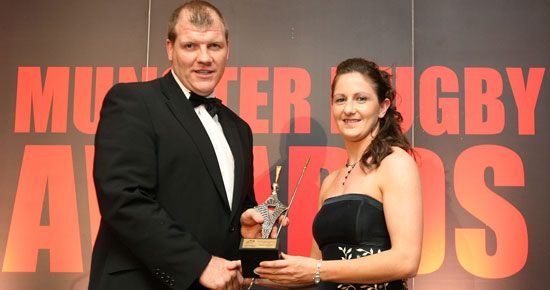 Ireland have finished third in the FIRA Women’s European Championship in Amsterdam after they drew in a thrilling game against France in their final outing.

While Ireland will be disappointed to have let a 17-8 half-time lead slip, their three tries to France’s two means that they have secured their highest ever finish in this competition and have come agonisingly close to beating the French for the first time.

Ireland got off to a blistering start when they raced into a 7-0 lead after Lynne Cantwell scythed through the middle to touch down after just six minutes and Grace Davitt converted.

Cantwell’s storming start paved the way for a superb 80 minute performance for the UL-Bohemians back who was a consistent threat in the middle throughout the game.

France hit back quickly with a try of their own when Céline Allainmat brought her team back into it with an unconverted try.

Ireland continued to impress with their off-loading game and the pushed ahead again when fullback Niamh Briggs won a chase through to crash over after Ireland’s backs had shone with some super handling.

Veteran French out-half Estelle Sartini knocked over a penalty to reduce the deficit to 12-8 but Ireland had the last say of the half when winger Helen Brosnan, making her first start in the green jersey, punished a French mistake close to the line to score her first try for her country.

Ireland started the second half still in good form with Cantwell again impressing with a surging run through the middle to make good ground for her side. France recovered though and their class and ability was evident as they clawed their way back into the game.

Sartini found her side some good possession using her expert boot and then lock Mélanie Gauffinet crashed over after a driving surge from her pack.

Ireland wing Jeannette Feighery then highlighted her own attacking prowess and she made a superb run out wide to out-fox the French defence and score and push her team’s lead out to 22-15.

It looked as if Ireland would secure their first ever win over France but in the 80th minute the French pack forced their way over the line for a try which was converted to ensure the sides finished level.

Ireland finish third in the competition however because they outscored France by three tries to two.
Captain Fiona Coghlan said: "We were disappointed to draw the game and not win it but finishing third is a big achievement for us and this competition has allowed us to blood a lot of players which will stand to us in the years ahead."

Flanker Carol Staunton who won her first cap in the game added. "It was a great game for me to play in my first Irish game and I’ve learned a lot from the experience. France are a tough team and they really came back at us in the second half. I’ll take so much from this competition and being part of this squad has definitely made me a more mature player."