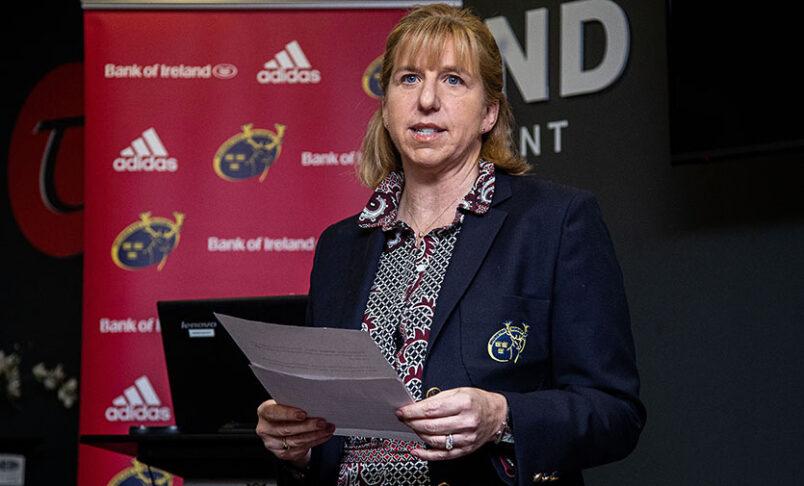 Munster Rugby recently spoke to Women’s Committee Chairperson Wendy Keenan to discuss the strides made in the development of girls’ and women’s rugby in the province in addition to the return of competitive action after a prolonged absence due to Covid-19.

In recent weeks, structured leagues at U18, U16 and U14 have kicked off while at adult level, Division 1 and Division 2 of the Munster Women’s League got underway. Later this month, Minis players will have their first provincial blitz of the season at Musgrave Park.

With so much girls and women’s rugby taking place throughout the province in recent weeks, Keenan admits it’s wonderful to see competitions return after the lack of rugby due to the pandemic.

“The reflection back to us is that the players are just delighted to be back playing,” Keenan told Munster Rugby.

“While we’re playing leagues at the moment, our youth (cup) competitions will follow after Christmas, and hopefully, we’ll get to play our finals with the boys in the ‘Festival of Rugby’. History will be made as it will be the first time that this has happened. It’s wonderful now that we’re now back on the pitch and the competitions have all kicked off.”

Seeing the finals of cup competitions for age-grade girls’ rugby being held on the same day as the boys’ editions, for the first time, is just one aspect of the new season which Keenan is excited about.

A former player with Old Belvedere, Shannon and Ballincollig, Keenan is also looking forward to the U14 league this year which now consists of 21 teams. There has been considerable growth at this age-grade with Blitz days being the main form of competition just three years ago.

“Our main aim this season is centered around participation. I suppose that’s part of our recovery from Covid.

“In the past three years, we’ve moved from blitz days for our U14 players to a well-established league structure with 21 teams participating this season. That also included our development programme for our emerging teams at U14 where they will have their Blitz Day tournaments as well.”

In total, there are 48 teams competing across the three age-grades; U14, U16 and U18. While for younger players, participation in on the rise too with the number of girls-only Minis sections increasing.

“What we’re seeing is more girls playing at an earlier age which will only pay dividends in the long-term to the adult game. There has been considerable growth in the number of clubs represented in the girls-only Minis section to our age-grade structure. So there is also more opportunity for girls to take up rugby with their local clubs which is a very important part of this jigsaw.”

“Across the board at Minis and age-grade, we are seeing a growth in the numbers which will bolster our adult game in the very near future.”

This participation can only be enhanced by recent successes and developments at adult level.

In the last few weeks, Ballincollig RFC made their return to the women’s AIL for the first time in 11 years. The club have enjoyed a positive start to the season with two wins from three games under their belt.

Last month, the Munster Senior Women squad won the 2021 Vodafone Women’s Interprovincial Championship. 12 players made their debut throughout the three-week competition with these players having progressed through the pathway structures which exist in the province. 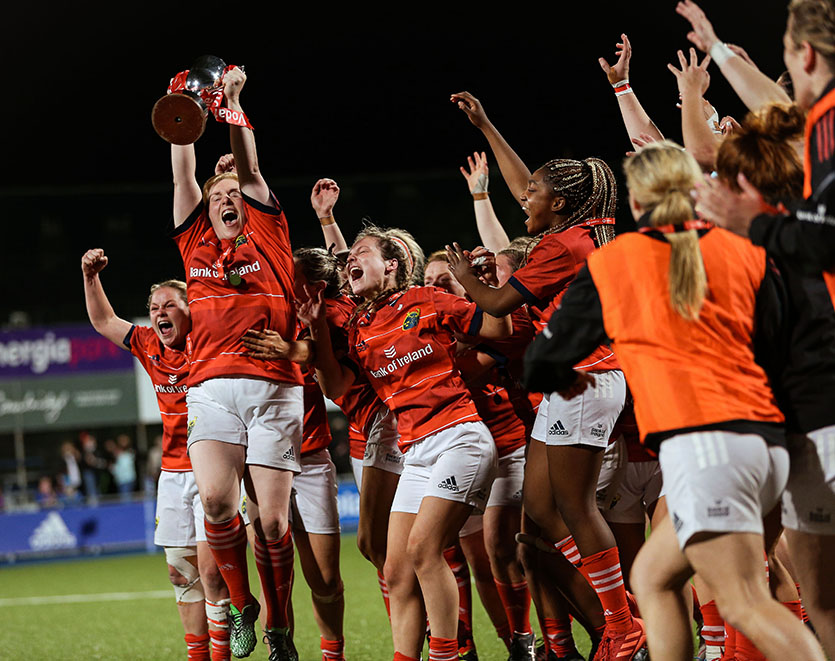 In addition to this, all of Munster’s games were on national television which, of course, offers visibility to aspiring players in the province.

“It was a testament to the hard work that they put in behind the scenes which began months ago which many of us don’t realise. There were 12 players who made their debut this season at the Interpro level. These players have come through our player development pathway and some were part of the U18 winning Interpro team so it gives us in Munster far more exposure to the game which is vital.”

“It’s important to know that our young players coming through that player development pathway see players ahead of them making it through to the Interprovincial scene and winning the trophy.”

Other developments which have taken place in the girls and women’s game include the Twilight 10s competition which is open to all third level colleges and club teams.

The competition places an emphasis on fun and participation and is a great opportunity for clubs and third-level colleges to take part in an enjoyable mid-week activity.

In addition to this, the sport is continuously being introduced to schools throughout the province and there are plans to start Schools Junior and Senior Cup competitions in the future.

From a player development perspective, county development squads have been introduced at U18 and U16 level. This approach provides an opportunity for players in their own county to receive great coaching opportunities which include skills programmes and strength & conditioning programmes to further enhance their development.

“We’ve also seen the introduction of an U18 and U16 county programme,” explains Wendy. “Within this programme, we’re looking at the introduction of strength and conditioning, nutrition, skill development and support for all of those players which in the long term, will increase our participation but also lift the standards within the game.” 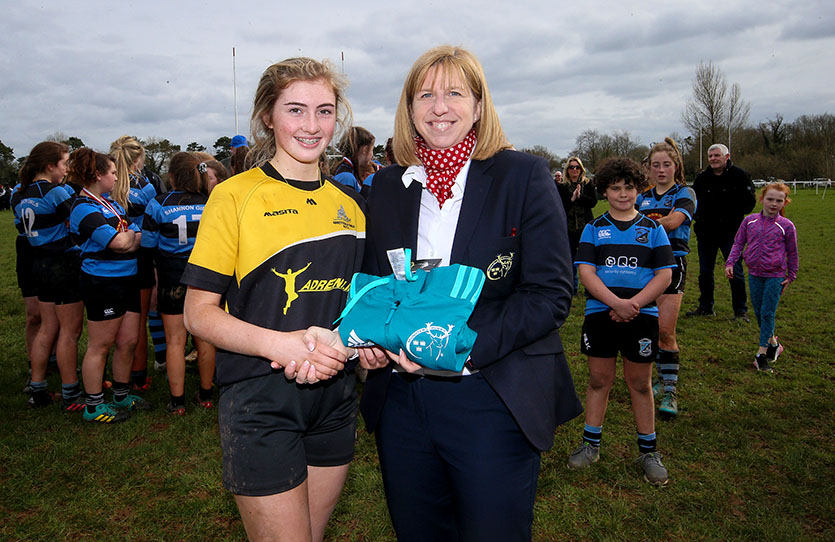 The implementation of the these various initiatives, competitions and structures could not be achieved without the bedrock of strong volunteerism within the province as Keenan explains:

“We’re highly indebted to the clubs, the volunteers and the parents who offer tremendous support to the game without whom the game would cease to exist. Our committee is comprised of dedicated volunteers who spend hours of their time every week to ensure that rugby is provided at a grassroots level and this is done in conjunction with real-life commitments including full-time jobs. We also work very closely with the professional women’s development staff and we work as a team to deliver a holistic approach to the player and coach development within clubs.”

These volunteers, many of whom are former players and have strong knowledge of the game, sit on various sub-committees and are able bring ideas to the table to improve girls and women’s rugby in the province.

“So an important factor is that we now have representation on the relevant sub-committees within the organisation. We need to have people who know about the girls’ and the women’s game on those committees where girls’ and women’s rugby is being discussed and the decisions are being made.

“We need to contribute to that decision-making process so we can ask the necessary questions and that helps to drive standards and therefore performance. The increase in the dedicated women’s development staff has afforded more engagement with club and coaches throughout the province.”

Ultimately, the role of volunteers in the girls’ and women’s game in the province is vital to the sport’s continued growth and success. Keenan urges people who are interested in the sport to take up a role in their club, particularly those who used to play the game.

“Recruitment and retention of players and coaches is an ongoing challenge within the clubs especially after the break that we’ve had with Covid.

“I suppose what we need is more volunteers at grassroots level to continue the growth in the game. I’d encourage all past players to stay involved in the game in some capacity and to re-engage with their local club or school.”

Looking ahead to what will be a very busy season, Keenan is excited about the introduction of scrums and lineouts at U16 level while the ‘Festival of Rugby’, which will see the girls’ age-grade cup finals played alongside the boys’ finals at Musgrave Park, promises to be a big event.

“I’m looking forward to seeing the introduction of the scrums and the lineouts at the U16 level, something which we had worked on last season but didn’t have the opportunity to introduce. I’m excited about our U14 league, I think it’s going to be very competitive this season and what I probably love the most is looking at the pictures on social media on a Sunday night or Monday morning which are captured by the clubs which we love to share.

“Then in March, I’m looking forward to our festival of rugby where we’ll get to play our finals with the boys which hopefully will be a big event.”