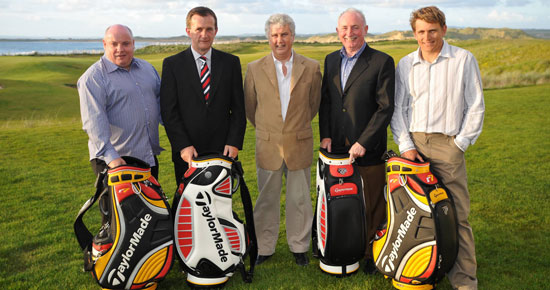 Doonbeg Golf & Spa Resort was the spectacular setting for the Munster Rugby Sponsors Golf Day, which saw representatives from Munster Rugby’s family of sponsors take part in a team competition at the Clare resort on June 5th last.

The winning team were presented with their prizes by the Immediate Past President Gerry O’Loughlin prior to a celebratory dinner in Doonbeg that evening, with the Heineken Cup also present.

The prize of longest drive of the day was awarded to Ron Lehane of Timberland, while Eddie McGrath (Ballygowan) had the distinction of winning the nearest the pin.

Munster Rugby would like to take this opportunity to thank it sponsors for their continued support, and also to the staff and management of Doonbeg Golf & Spa Resort for their hospitality and assistance in the event.

Below: Ron Lehane of Timberland with Garrett Fitzgerald and Gerry O’Loughlin

Below: Eddie McGrath (Ballygowan) with Garrett Fitzgerald and Gerry O’Loughlin

Below: Nigel Trimble and Jim Cusack of Magee