Excitement Building With IMART 2022 Just Around The Corner 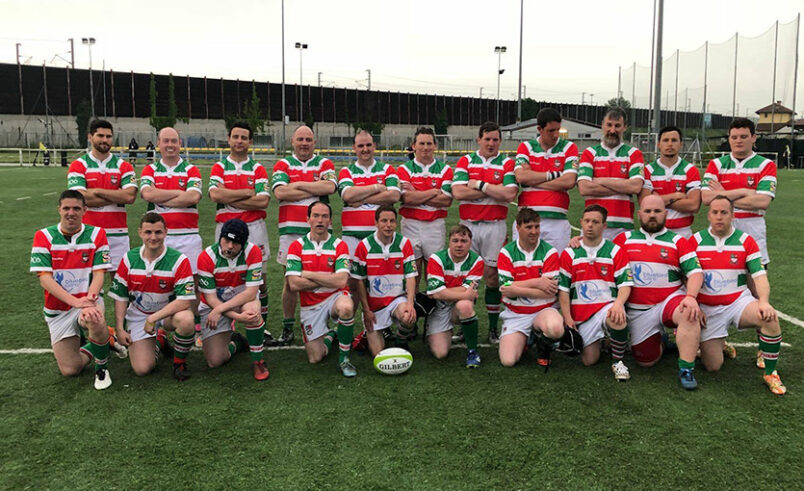 Liam Maher, manager of the Sunday’s Well Rebels, Ireland’s first mixed ability rugby team, laughs when asked how he got involved in mixed ability rugby and how nine years later that led to Cork winning the bid to host the International Mixed Ability Rugby Tournament (IMART) 2022.

Alan Craughwell founded the Rebels after bringing the idea to Maher who was coaching with Sunday’s Well RFC at the time. Craughwell, who works with Munster Rugby’s nominated charity partner, the Cope Foundation, believed it would be a good outlet for people with disabilities.

“He said, ‘I think there’s a few lads that I’m dealing with here that could benefit from this,’ Liam recalled of his initial conversation with Alan.

“The following morning I was in the swimming pool with him and he touched me on the shoulder knowing that I was involved in coaching in the ‘Well and he said, ‘Would you bring this to the club?’ I brought it to the executive at the time, they gave it a green light, they said it’s the right thing to do and we started January 2013 with the first Irish mixed ability rugby team.

“And we have grown. We had 13 players back then. We went to the first mixed ability rugby tournament in Bradford in 2015 and we came away as winners. It was a fantastic day.”

The club reached the final of IMART in 2017 which was held in Vitoria Gasteiz in Northern Spain. That experience only further fueled the club’s desire to become hosts and that dream was realised when the city of Cork and the club were awarded the honour of hosting the 2020 edition but unfortunately, that tournament had to be postponed due to the onset of the Covid-19 pandemic.

“Little did I know back then what was going to be involved. We have a fantastic project team pulled together by the club and by ourselves to get the tournament up and running for 2020 and we all know what happened there with the pandemic and Covid. The handbrake was pulled on Patrick’s weekend 2020. We were very close to running the tournament at that point but yeah, look, we’re bigger, better, brighter now and we’re 25 days out.”

With just a little over three weeks to go until the opening ceremony at Musgrave Park, Maher admits there is a lot of excitement around the club.

“There’s huge excitement in the club. The club is getting itself cleaned up, it’s like a Spring Clean. There’s mad work going on over there.

“It’s very real. In the last couple of days we’ve had people working on the transport, the logistics. There’s 75 50-seater buses booked for the week to transport people from Dublin, Rosslare, Dublin Port getting them to Cork.

With teams arriving from all over the world from 15 different countries, the week-long tournament is sure to be a special occasion.

“For the 27 other teams that are travelling to Cork from some 15 countries; Ecuador, Chile, Argentina, Canada, Malta, Poland and all the home nations, their excitement is palpable at the moment. For ourselves, it’s a little bit different because it’s our home (tournament). I don’t think they will actually figure out how big and how good this tournament is going to be until they arrive here at the opening ceremony and they see the work that has gone on.”

A hugely important and significant aspect of this year’s tournament is that women’s mixed ability teams will be competing for the first time with the Irish and Munster representation coming from the Ballincollig Trailblazers, something which Maher is very proud of.

“That is huge and it’s a hugely proud outcome of this tournament that we have the first ever women’s tournament happening. Ballincollig Ladies are our Irish partakers in the tournament and they are the first women’s mixed ability rugby team in Ireland and that club now has girls from right through to senior level.”

Although it is the rugby that will be taking centre stage, this year’s tournament will see the first ever Mixed Ability Week (MAW) which will see new sports like football, rowing and boxing showcased.

During this week knowledge workshops and international conferences will provide the opportunity for this European Erasmus+ Sport supported event to spread the word and work of Mixed Ability Sports to a wider audience.

This is very much at the forefront of Maher’s mind and he is determined that IMART 2022 will leave a lasting legacy where the mixed ability model, not just in sport, is applied to all walks of life.

“The impact we want to have is that we want to roll out the mixed ability model across all walks of life and not just in rugby. It obviously fits well with rugby where you have players of all shapes and sizes, even on the Munster team, being able to play and have their role. And that transcends down into our own model but then it’s to roll that out into everyday life.

“If you look at my own involvement in mixed ability with the Rebels, I never came into contact with someone with a disability before in my life and then all of a sudden I did and now I have people who are fully employed within my own businesses. They then have an effect on the other 20 or 30 people working in that business who are having to deal with or adapt with somebody with a disability. It’s giving those guys and girls with a disability a focus, something to get up out of bed for, go to work, be responsible. The mothers, the fathers, are loving that outcome of mixed ability sport.

“For the tournament, we’re not just having rugby. We have boxing, rowing, kin-ball, soccer – all events taking place in Cork over the week.

“The mixed ability model, where we’d like to see this going is that it would be inclusion working at its very best.”

IMART, now at its 3rd edition, has become the ‘World Cup’ for Mixed Ability rugby clubs, and is the only international event where people of all abilities play together in the same un-adapted, mainstream 15-a-side game abiding by World Rugby Laws.

Following the huge success of the inaugural tournament in Bradford (UK) in 2015, and the most recent 2017 event which was held in Vitoria-Gasteiz, capital of the Basque Country in Spain, the event now moves to Cork for 2022.

The Tournament aims to promote participation in rugby and disseminate rugby´s core values of integrity, passion, solidarity, discipline, and respect.

The staging of the event in Cork marks a significant achievement for Sunday’s Well RFC, who coordinated the bid, and acknowledges the leading role which the Club now plays in championing the sport.

A further exciting aspect of this week is the 1st MAW, which will introduce the mixed ability model to a variety of new sports through showcase events and open taster sessions  along with an interactive conference programme featuring renowned speakers who will present and discuss the latest research around Mixed Ability sport across many disciplines, drawing on and including participants’ experiences.

“Cork is a fantastic city, with a great rugby tradition, and Sunday’s Well Rebels are one of the best brilliant examples of rugby clubs being truly representative of their local community. We are incredibly proud of this event and recognise that staging the tournament in 2022 will give enough time to the teams to put in place the necessary arrangements.  We trust IMART & MAW 2022 will spread IMAS’ inclusive message far and wide and inspire many more individuals, clubs and National Governing Bodies to take up Mixed Ability.”

This week of Sport and Inclusion in Cork will have three main strands:

Ultimately, IMART intends to promote a long-lasting shift in perceptions and behaviours around diversity, removing the barriers which prevent people of all abilities from enjoying mainstream sporting activities, using the power of rugby and education to make this world a better place.

We are delighted to have Cope Foundation as our nominated charity partner for the season and recently released a four-part video series with the organisation.