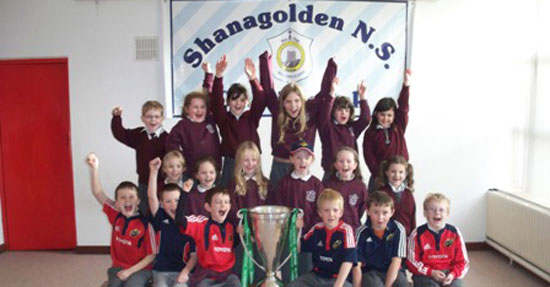 Tuesday the 9th of December saw the Heineken Cup stop off at the schools covered under the Estuary RFC umbrella.

Munster and Estuary Development Officer, Euan Gee, gave children from a number of schools the opportunity to hold and be photographed with Munster’s latest prestigious piece of silverware.

Estuary RFC have been taking huge steps to promote rugby in the West Limerick area since their inauguration in 2005. This season has seen an extensive schools coaching programme put in place which has brought rugby to upwards of 600 children from as far West as Glin across to Pallaskenry nearer Limerick city. Next Tuesday the 16th December will see the first Estuary schools shield tournament held in Shannagolden.

Training takes place on Sundays at 10.30 in Shannagolden. Children aged 5-12 will always receive a warm welcome. If you are interested in becoming associated with Estuary RFC in any way, come down and speak to either Tom or Joe on Sunday mornings.