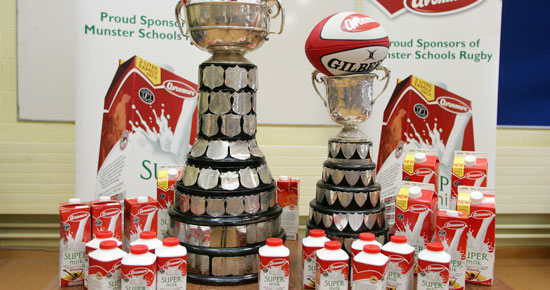 With the game entering injury time, Pres were defending gallantly inside their Twenty Two and when they did eventually gain possession, their pack worked the ball up field in a series of pick and drives. When they did get into the Christians half they released quick ball out the back line and Steven Dinan who had gone back to full back, made the extra man and raced away to score in the corner.

His difficult conversion attempt to level the game just fell short, but referee Darragh McCormack ordered the kick to be retaken because of the shouting by some of the Christian players at the kicker. Dinan held his nerve and successfully converted to set up another meeting between these sides.

Favourites C.B.C. will be wondering why they are not heading to Limerick in two weeks time for the final of the Junior Cup, as they totally dominated this tie but just could not finish off their opponents.

Pres’ on the back foot for long periods showed great resilience to withstand such great pressure as they put in the big hits from start to finish. None more so than Dinan who proved to the Mardyke side’s saviour on numerous occasions.

Christians dominated the opening exchanges with the ball going from wing to wing but bad handling and the wrong option at crucial stages denied them scores.

Pres first attack in the thirteenth minute produced the opening score. A break by Gavin O’Callaghan brought play into the Christians Twenty Two and from the ensuing ruck scrum half Philip O’Leary went blind and linked up with Ross McCarthy who sent Darragh O’Keeffe in at the corner.

The Sydney Hill College began to expose gaps in the Pres defence with Cian O’Halloran, Andrew Joyce and Adam McCarthy all looking dangerous with ball in hand. However it was left to their pack to produce their opening score three minutes before half time.

It was Joyce who made the initial break and when stopped close to the line, a series of drives by the pack resulted in prop Rory Burke touching down to tie up the scores.

Christians continued to dominate the second half and full back Niall Griffin was tidying up anything that Pres threw at him.

O’Halloran found a gap in the Pres’ defence outside their Twenty Two with ten minutes remaining and raced away to score under the posts and David O’Riordan converted for a 12-5 lead.

Christians continued to press home their advantage but could not add to their tally and than came Pres’ last minute rally to tie up the scores, 12-12.

Crescent College Comprehensive booked their place in the final of the Avonmore Milk Munster Schools Junior Cup with a hard earned replay win over Glenstal Abbey at Dooradoyle yesterday.

Neither side could manage a try when they first met, it finished 3-3, but this time Crescent scored the crucial try eight minutes into the second half.

In a game dominated by Glenstal the winning try culminated in a good threequarter line move which ended with second row Brian Mulcair barging his way over in the corner.

Glenstal went in front with a penalty by flyhalf Luke Bradley after nineteen minutes and the outcome could have been different had Glenstal not missed three penalty chances. Crescent Comp. will now go on to face St. Munchin’s in the other semi-final.