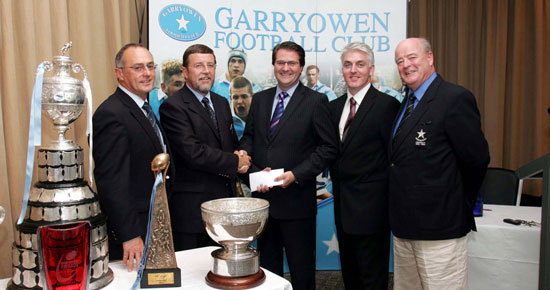 Read the latest news from clubs around the province

The substantial six figure, three-year sponsorship deal was confirmed at a special event hosted by resourcefor the Club at the Clarion Hotel Limerick.

The announcement follows a spectacular 2006/7 season for Garryowen F.C. in which the club won an unprecedented Grand Slam, winning the AIB League and Cup, Munster Senior and Junior Cups.

Paul Bean, Managing Director of resource, said, "We are delighted to be the official sponsor of Garryowen F.C. and support the club in its quest to defend its AIB League and Cup titles.  Garryowen F.C. is a leading international brand and therefore is a perfect fit for our company."

Paul wished the Club further success in the coming season and also as Ireland’s representatives in the International Club Rugby Championship Languedoc-Roussillon in the South of France. The tournament which runs from the 4th to the 14th of September 2007 is being held in association with the Rugby World Cup.

John Garrett, President of Garryowen F.C. said: "The sponsorship received by resource this coming season will contribute significantly to the Club’s continued success and our commitment to youth development at the club. This will maintain our position at the forefront of Irish Rugby in the years ahead."

In addition to thanking resource for their sponsorship for the coming season, John Fahey, Club Chairman of Garryowen F.C., thanked all the other Club sponsors and advertisers for their continued support. In particular he wished to thank OBI, Whelan Group (Ennis) and Irish Cement for their continued sponsorship of the Club’s Youth Academy which provided ten players for the successful senior team last season and several other Youth Academy members who have graduated into Junior and Full Contracts with Munster Rugby.

resource is a major all-Ireland provider of cleaning, security, hygiene, car parking and other management services to a range of blue-chip clients in both the private and public sectors.

In August 2006 the company acquired Grove Services Group, the second-largest provider of property care services and facilities management in Northern Ireland, and in November 2006 it acquired CCS of Limerick.

Following the acquisitions, the company re-branded as resource on 9 November 2006 to more accurately reflect the enlarged group’s offering as an outsourcing partner and to better position the company to develop its business in Gt. Britain.

Membership for Killorglin Rugby Club has opened for the 2007/08 season.  Killorglin RFC always welcomes new members, both playing and non-playing, to follow the ongoing development of the club as it has been promoted to Junior League 1 status this year.  For a club that reformed only eight years ago, this is a great achievement.  A full membership of the club costs €30, a family membership costs €50, and juvenile membership costs €10.  The club would also like to meet anybody interested in under-age coaching.  Anybody interested in becoming a member can contact club PRO Aidan Clifford at 0879065927, or alternatively leave a message with club secretary Madeline Foley (066) 9762102.
Senior Team training has begun for the pre-season.  It takes place at 7pm every Monday, Wednesday and Friday at Killorglin Community College pitch on Langford Street.  New faces are always welcome and the club is happy to introduce new players to the game of rugby.
Training of Juvenile teams will begin on Saturday, September 1st.  We will also be having a registration day for juvenile teams on Saturday Sept 8th.  All players are welcome to play.  For information, contact Youth Officer John Costello on 0863558185
Tag Rugby has finished for the summer.  Thanks to everyone who took part and we look forward to seeing you again next summer.