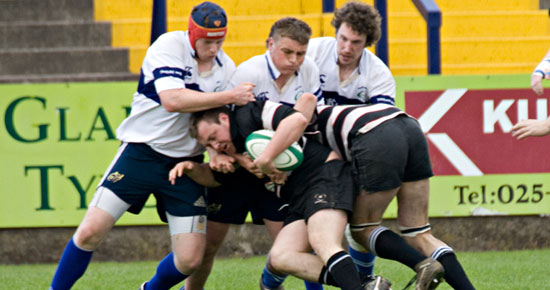 Club members and the four adult teams were out in force to celebrate the successful year enjoyed by the club. Each team contributed to this success by claiming silverware or gaining promotion during the season.

The Junior first’s gained promotion to Division 1 for the first time in the club’s history after coming second in the league behind St. Senan’s. Both sides also contested for the inaugural Junior Bowl which Ballincollig secured winning 39-nil in Bruff. Player of the year was awarded to Billy Quinlan and the player’s player of the year was Neill O’Donovan.

holiday Monday to add the Dave Dineen Cup to their collection. They had previously won the Dennehy Cup earlier in the year when they beat Cobh Pirates 11-8. Podge Bohane was named player of the year.

The Junior thirds did the double winning the J3 League and then the J3 Cup against Kinsale in Musgrave Park in early April. They also won the McCarthy Cup final at Musgrave Park with a 16-0 win over Bandon. Kevin Ryan received the player of the year accolade.

It was not all left to the men to bring home the silverware as the women’s team played their part in winning the All Ireland Bowl in Port Laoise after defeating Old Belvedere 10-5. Marie Barrett scooped the women’s player of the year award and Geraldine Gallaghue picked up the most improved player of the year, while best newcomer went to Megan Henchin.

The club itself will be busy for the summer as it hosts the IRFU Summer Tag each Tuesday night. There are places still available so make your way down to Ballincollig RFC (in front of Classis Lake) next Tuesday at 6.30pm to register a team, or just to join in with a team. More information on the IRFU tag can be found here.

On Sunday the 21st Ballincollig will be hosting a Family Fun Day, where there will be plenty to keep all the family entertained from midday. All are welcome!