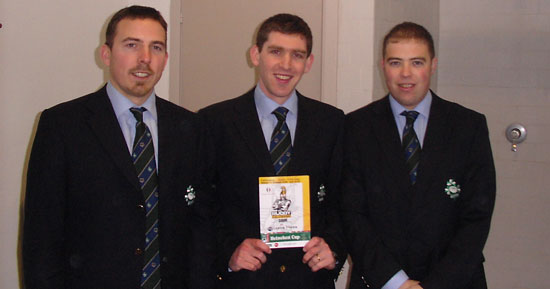 Bruff’s George Clancy is set to referee the Churchill Cup Final between England Saxons and the New Zealand Maori in Twickenham on Saturday. (Kick off 4.30pm)

Having recently picked up the accolade of Munster’s Referee of the Year, George refereed five Heineken Cup matches last season.

Having started refereeing in September 2000, George has gone onto to referee at the U-19 RWC 2005 (South Africa) and the U-21 RWC 2006 (France). To date he has officiated at the Uruguay v USA World Cup qualifier, seven Heineken Cup games, a quarter-final of the Challenge Cup and the last game in Lansdowne Road- Leinster v Ulster in front of a capacity crowd. At a national level he has refereed the inaugural AIB Cup (2006), the U-20 AIL final (2004), and the AIL Division 3 Final (2005). He has also refereed the Heineken Munster Junior Cup (2003), the Avonmore Milk Munster Schools Senior Cup (2005) and Avonmore Milk Munster Schools Junior Cup Finals (2007). Other highlights would include touch judging at major internationals including Scotland v New Zealand and England v The Barbarians. From Bruff in Co. Limerick, George is a former player with Bruff RFC and is still very much involved with the club.

Peter Fitzgibbon of Thomond RFC refereed at the Seven’s in Twickeneham last weekend and will do so again in Murrayfield this weekend. He also refereed in both the Magners League and European Challenge Cup, and was fourth official for the Heineken Cup Final 2007. This followed on from his participation in the U19 World Cup in Dubai, where he refereed Australia v New Zealand amongst others.

Scotland A and Ireland A will contest the Barclays Churchill Cup Plate Final (1.45pm)

Level One Coaching Course in Limerick