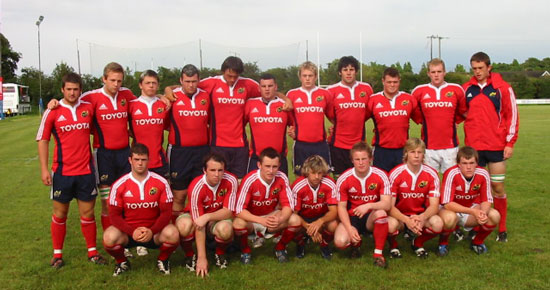 The Munster U20 side travelled to Wales this weekend to take on a Cardiff Blues Academy side in a challenge match, in preperation for the upcoming Interprovincial series.

The Munster U20’s will take on the Cardiff Blues Academy at 19.45 this evening in Beddau RFC, Wales.

A twenty six strong team was selected to travel this weekend and they are joined by Head Coach Ian Costello, Forwards Coach Anthony Foley and the Management team.

Following this weekend’s game the Munster U20 Team will play UL Bohemians and UCC in challenge matches prior to commencing their Interprovincial campaign against Connacht on September 12th in Limerick.

The Munster U20 Squad commenced training at the start of July, and travelled to Wexford last weekend where they took advantage of the facilities at the Cryotheraphy Clinic, Hydro Pool and the High Performance Gym at Whites Hotel.

Two pitch sessions were held on Friday with a further one held on Saturday morning at Wexford Wanderers RFC and on Saturday afternoon they took part in a trial match at Enniscorthy RFC.

The training camp was of great benefit to the players and management alike, as it aided in the squad selection process. The final squad of thirty players was announced, of which twenty six were then selected for the challenge game in Wales.

Coaching Courses for the Upcoming Season