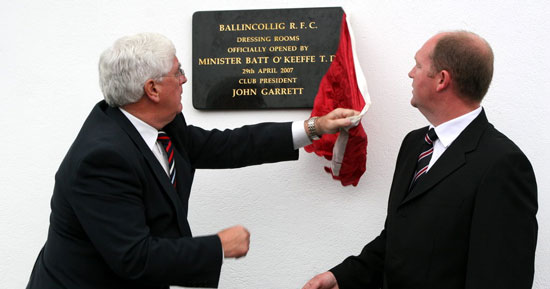 After years of intense fundraising and planning, Ballincollig RFC opened their new state of the art changing facilities on Sunday, with the local community out in force to celebrate the new venture

On Sunday the 29th of April, Ballincollig Rugby Club invited the community and various dignitaries to witness the opening of their state of the art changing rooms in the Club. Ballincollig RFC is a relatively new club and its short history is a story in itself. This opening marks the end of a period where the club saw itself go from one end of Ballincollig, sometimes with changing facilities and sometimes not, and the beginning of a period where according to Club President John Garrett "it’s now all about the rugby."

To celebrate the opening Bishop Buckley had a few words, followed by a prayer from Father Sean O’Driscoll, culminating in Batt O Keefe, Minister of State doing the official opening. John Garrett thanked the players, his family and club stalwarts who made the day possible, but special praise was reserved for Mick O’Keefe in his project management from all the players, as they say the experience of a shower in December thankfully will never be the same!

Ballincollig RFC started off in modest circumstances as recently as 1978, some more seasoned players from Ballincollig were trying to find a way to continue their playing career. Tony Lancaster is one of the founding members of Ballincollig RFC explains "It began with some older fellas trying to continue to play rugby, trying to play for an extra year or two and that is really how it started".

Groundless and boasting the bones of just one team, they began to play in local firm John A Wood’s GAA grounds in Ovens County Cork, after a few years they moved to Murphy’s Farm in Bishopstown, and Inishmore in Ballincollig’s Regional Park, and the Oriel House Hotel, the latter venue was the first that boasted something remotely akin to changing rooms. In 1991 came the break through from a man called Noel Tanner.

Noel Tanner owned a bungalow opposite Classes Lake outside of Ballincollig, and was keen not to see buildings built opposite his house, so through some organisation sold his land across the road to what was to become Tanner Park, home of Ballincollig RFC.

All was not home and remotely dry for the players in Ballincollig RFC yet, the land in question was in fact a pond with surrounding swamplands, someway short of today’s 2 pitches. It took a landslide at the end of Cork’s Carrigrohane’s Straight, and some helpful County Council members to make a Carrigrohane’s disaster turn into Ballincollig Rugby Club’s playing surface!

In 1991 Munster legend Tommy Kiernan turned the sod, and by the 1993 season Tanner Park was operational as a playing field. If now we had the land, it was to be another 4 years for a clubhouse, which is one of the finest in Cork, and this weekend it’s joined by high specification changing rooms that any senior club would be proud of.

If the players finally have a home, they have also come far from 1 team, now the club boasts Junior Munster Division 2 team, as well as South Munster Junior 2 and 3 League, as well as Under 20, Under 18, Under 16, and under 14 as well as a thriving mini rugby set-up. The growth doesn’t stop there; the club has another senior team, with the founding of the Ladies team back in 1995.

Tony points out "We’ve achieved home grown players, apart from 3 on the senior team, those fellas have been with us from under 8 level!" Indeed the club is rightfully pleased with the under age structure, in addition to the busy Saturdays filled with mini rugby the club has added to it’s under 14 16 and 18 structure with the under 20 recently added to the club’s portfolio. This has been very successful, as the club knew no success would come from drafting in players en masse for the senior team, pride in the jersey is endemic, simply because these lads have fought to wear it since they were boys.

The future, well the club’s future lies in Munster Junior Division 1, Club President John Garrett elaborates, "We make no bones about our ambition to have the lads into Junior Division 1 rugby in the next three to four seasons, competing against the likes of Youghal and Cobh Pirates, and we would love to be playing Senior Rugby in 10 years time. We have made the investment in the infrastructure, and our club facilities are now at a level that they are the envy of some senior clubs". Indeed, Ballincollig’s Rugby Teams may literally be home and dry, but their journey is a long way from over.