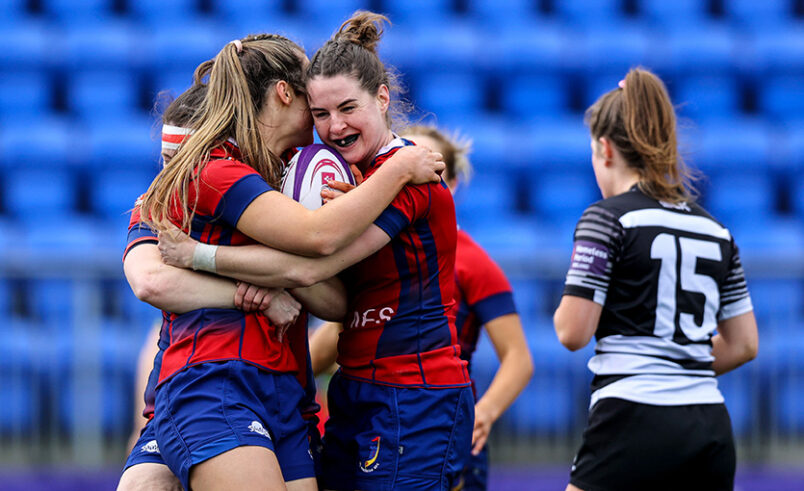 It was Women’s Finals Day in the All Ireland League. Railway Union won the title defeating Blackrock College 24-18 in an exciting decider.

Young Munster remain in fifth place six points behind Cork Constitution, after their 12-7 home win over U.C.C. Tries from Alan Kennedy and Adam Maher and a conversion by Evan Cusack had Young Munster 12-0 ahead at half time. A try from Cian Bohane converted by Billy Kiernan earned the students a losing bonus point.

In Division 1B Highfield got back to winning ways with a hard earned 22-20 home win over Old Belvedere.  The Woodleigh Park side led 14-6 at half time and had tries from Darragh Fitzgerald, Ronán O’Sullivan and Travis Coomey. Shane O’Riordan kicked two conversions and a penalty.

Shannon moved into the top four with a great second half display at Templeville Road, where they defeated St. Mary’s College 25-18. The Limerick side were 18-10 behind at half time. Declan Moore, Kelvin Browne and Killian Dineen were Shannon’s try scorers and Jake Flannery kicked two conversions and two penalties.

The meeting of the top two sides in Division 2A at the Spafield saw Cashel defeat leaders Queens University 18-10. Niall Fitzgerald and Ciaran Ryan scored tries for Cashel and Cian Mullane added two penalties and a conversion.

Dolphin ended a poor run of form with a 29-12 home win over Old Crescent. Tries from Ryan Foley, Thomas Scannell and Alex Denby, two of which Foley converted had Dolphin 19-7 ahead at half time. Jordan Higgins replying with a try for Old Crescent and Ronan McKenna converted. Foley extended Dolphin’s lead with a penalty, before Higgins scored the visitors second try. A try late in the game by Cian Fitzgerald converted by Foley secured the bonus point win for Dolphin.

A late try from Conor Botha secured U.L. Bohemian four valuable points as they defeated Buccaneers 17-14 at the UL Arena.

City of Derry moved off the foot of the table in Division 2C after their 31-24 bonus point home win over Bruff. Andy O’Byrne, Kieran Bennett and Jack O’Grady scored tries for Bruff and Paul Collins converted all three and also added a penalty.

Midleton defeated Clonmel 14-0 at the Towns Park with a try from Brian Moore and three penalties by Stuart Lee.

Sunday’s Well occupy the bottom place after their 29-14 away defeat at Tullamore. Neville O’Donoghue and Gary McHenry scored tries for the ‘Well and Josh Featherstone converted both.