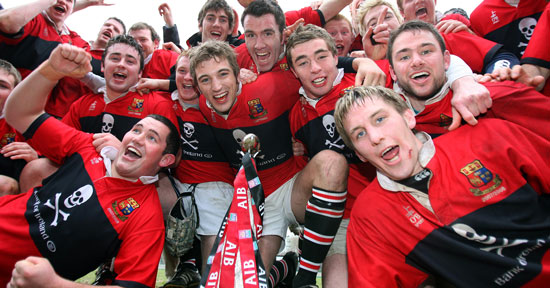 UCC claimed the AIB League Division Two title with an 18-8 victory over Young Munster on Saturday, while Instonians proved too strong for Bruff in the Division Three final.

Two of the toughest packs in the AIB League, two teams with an excellent defensive record, but equally two teams with a desire to play an up tempo game.
It could have been a tough, war of attrition type game. Instead the crowd at Donnybrook were treated to a festival of running rugby. Instonians had the key player in Niall Malone and his ability to direct play but also to unleash a hard running backline proved the difference as Inst emerged on the right side of a four try to two count.
On an extremely cold day the travelling supporters, both noisy and utterly committed to their team, were kept warm by the action on the pitch. Bruff’s outhalf Brian Cahill opened the scoring a minute into the game with a penalty but Inst. set out their stall early with a number of probing runs that seemed to catch the much vaunted Bruff defence off guard.
On seven minutes it paid dividends as centre Michael McKeever skipped inside the cover and floated a neat pass to Malone for the opening try of the game. It was duly converted by fullback Owen McMurray who was to have an excellent game with ball in hand and with the boot.
A couple of late changes to the Bruff side which saw Eoin Cahill replace his brother at scrum half and a switch in the threequarters may have disrupted the Bruff defensive patterns as Inst. skipped in on 15 minutes for their second try. From a well drilled maul Malone unleashed a long skip pass that saw Adam Telford beat the cover. Mc Murray again added the two points.
Bruff showed just why they were near impossible to beat all season as they dug deep and hit back almost immediately with a strong maul up the pitch a quick ball to Brian Cahill who stepped inside and offloaded to number 8 Martin O’Rourke who drove the cover and offloaded for flanker John Shine to score. Cahill added the conversion and the game was back on.
Both sides declined a number of penalty shots at goal in favour of touch kick and mauling lineout in a statement that this was a game for running. Inst applied this rule about half way through and it paid dividends as Malone again set the line in motion for centre Scott Uren to score.
Bruff refused to capitulate and Brian Cahill landed a penalty on 33 minutes to reduce the deficit. But Inst were to have the last word of the half when a quick tap penalty was impeded and earned them an extra 10 yards. McMurray landed the shot to leave it 22 – 13 to Instonians at half time.
The second half continued the committmment of both sides to open rugby, though both got on the wrong side of the ref at the breakdown on a number of occassions.
Bruff’s half time pep talk saw them take the game to Inst and 3 minutes in a long clearence kick was badly dealt with by Inst giving the big Bruff pack a chance to maul it to the posts before unleashing Shine for his and Bruff’s second try. Cahill was again accurate with the boot. The score gave their supporters heart with just two points in it the game was finely poised.
Seven minutes later the pendulum swung back to Inst. as Bruff were penalised and warned for coming in at the side. Inst. took the ball on and Bruff were again caught resulting in a yellow card for prop David Horan. He was replaced for the scrums by number 17 Stephen Forster, with David Gardiner making way. Instonians made the most of their numerical advantage and mounted a series of attacks on the Bruff line. Uren was held up just short but second row Kenny Morton was on hand to drive over under the posts. McMurray added the conversion. At 29 – 20 Inst. were in control.
Both sides enjoyed good phases of possession and position and as in the first half the game went from end to end. Horan returned to the fray to make a number of good carries off lineout ball while O’Rourke, who had worked hard all day, made way for Ger Looby.
Bruff attacked the line and Horan and Shine were again in the van but Inst. pilfered the ball. They could not clear the line cleanly and as Bruff’s Paul O’Brien chipped ahead he was unceremoniously dumped by Instonians hooker Wilbur Leacock. The Referee adjudged it to be late and binned the Inst captain. Bruff kicked the penalty but the game was pretty much up and from the re-start another infringement at the ruck allowed McMurray to add the final points of the game.
It finished Instonians 32 – Bruff 23. As the Inst. boys celebrated with "A score is a score" the Bruff faithful cheered their team from the pitch.