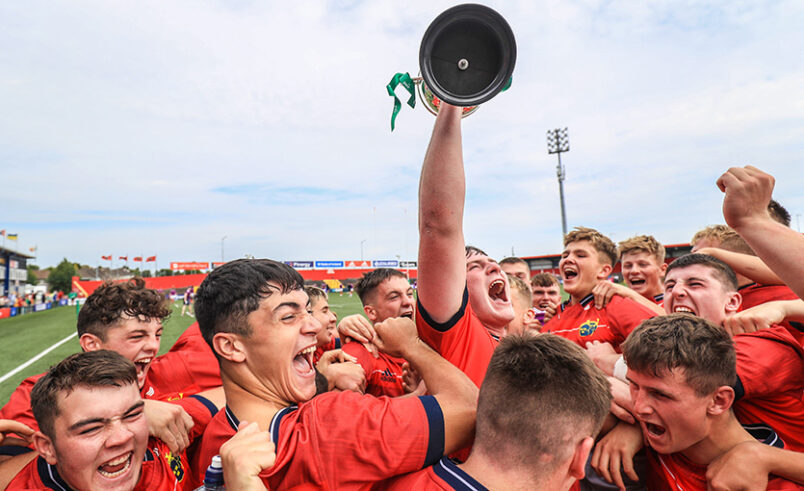 It was a busy weekend of age-grade Interprovincial action with four matches taking place across Saturday and Sunday.

On Saturday, the Munster U18 Girls opened their Interprovincial campaign with a 39-17 loss to Connacht in Corinthians RFC.

On Sunday, Munster U18 Boys Schools, U18 Boys Clubs and U19 Boys all faced off against Ulster in a Triple-Header at Musgrave Park.

It was a successful day with three wins recorded. The U18 Boys Schools side ran out 38-0 winners in what was Munster’s first U18 Schools title since 2014.

The second match saw the U18 Boys clubs come from 5-15 behind to emerge 24-18 winners while the last of the action saw the U19 Boys compete in a nail-biter as a last minute try and conversion secured a 19-15 win.

The Munster U18 Girls opened their 2022 Interpro campaign with a 39-17 loss to Connacht in Galway.

Munster took an early 5-0 lead inside the first five minutes thanks to a try from Ellie Cournane but Connacht responded with a converted try to take the lead.

A well executed crossfield kick saw Munster retake the lead and it was Cournane again who crossed for her second try of the game.

A yellow card for Munster then handed the initiative to Connacht and the Westerners took full advantage as they ran in three tries to lead 22-12 at half time. 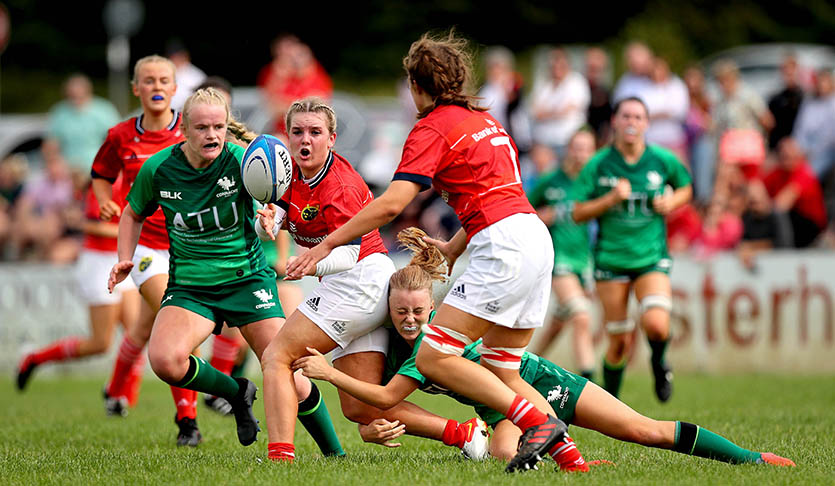 Two more tries for Connacht in the second half gave them a 22-point advantage before some quick thinking from Niamh McCarthy saw the Bantry Bay RFC player run down the blindside of a ruck to cross for Munster’s third try.

Unfortunately for Munster, it wasn’t enough as Connacht scored one more try thereafter to run out 39-17 winners.

Ulster had the majority of possession in the opening minutes and they almost went over for a maul try but for a knock on to occur just before the ball was grounded.

Munster then began to dominate the game as Jed O’Dwyer and Tom Coughlan combined well which saw the latter cross in the corner but there was a forward pass in the buildup. A Munster maul was then held up over the line as the home side looked to get the first try of the game.

Munster soon got that try. A pass from Gene O’Leary Kareem gave Tom Coughlan a one-on-one opportunity and the PBC winger made no mistake as he used his pace and power to touch down in the corner.

O’Leary Kareem nailed the touchline conversion to give Munster a 7-0 lead approaching the 20 minute mark.

Munster didn’t take the foot off the accelerator as a few minutes later, they were over for their second try. A powerful maul drive saw hooker Fionn Casserly touch down in the corner. O’Leary Kareem’s conversion drifted narrowly to the left and wide of the posts.

With a 12-0 lead, Munster pushed on once again. Some excellent work-rate on kick chase forced Ulster into a mistake which allowed Munster to go to their maul once again and it was Casserly who touched down for his second try. O’Leary Kareem’s conversion was unsuccessful as Munster took a 17-0 lead. 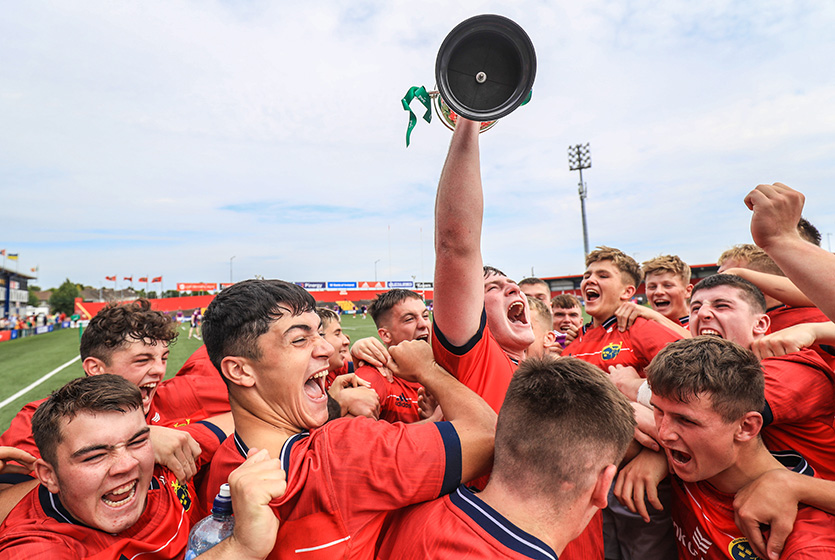 A strong carry by Gavin O’Riordan in midfield had Ulster on the backfoot and this allowed Oisin Minogue to pick the ball from the base of the ruck and crash over the line. O’Leary Kareem’s conversion was good as Munster took a 24-0 lead at halftime.

It was a much tighter affair in the second half as a well executed backline move off a scrum almost saw Matt Te Pou go over in the corner but some determined Ulster defence put the St Munchin’s College man into touch.

With five minutes remaining, Munster got their first score of the second half when Oscar Davey ghosted through a gap to touch down next to the posts. O’Leary Kareem’s conversion gave Munster a 31-0 lead.

Just before the final whistle, Munster went over for their final try as Te Pou crossed close to the posts which O’Leary Kareem converted as the 38-0 win was secured in addition to Munster’s first U18 Schools Interpro title since 2014.

Munster had a chance to take an early lead but Dylan Hicks’ penalty attempt went narrowly wide of the posts.

However, they soon went ahead when a superb backline move from inside their own half culminated in Michael O’Donovan crossing for the opening try of the game.

O’Donovan picked up the ball on the halfway line before breaking the Ulster defensive line. The outside centre then shifted the ball out to Nenagh’s Mason Cawley who did brilliantly to time his pass to perfection back to O’Donovan who crossed the line.

Hicks was wide with his conversion attempt as Munster took a 5-0 lead.

Ulster narrowed the deficit to 5-3 when their out-half JF Burns notched three points from the tee. The northern province then went further ahead after a try from Ben Neely which went unconverted by Burns.

Ulster extended their lead when James McCannon put Harry McKeown away with a good pass. The conversion from Burns was good as Ulster took a 5-15 lead.

In the opening 10 minutes of the second half, Munster dominated proceedings and their good work was rewarded when out-half Hicks carved through the Ulster defence in a superb solo effort which saw him cross under the posts. 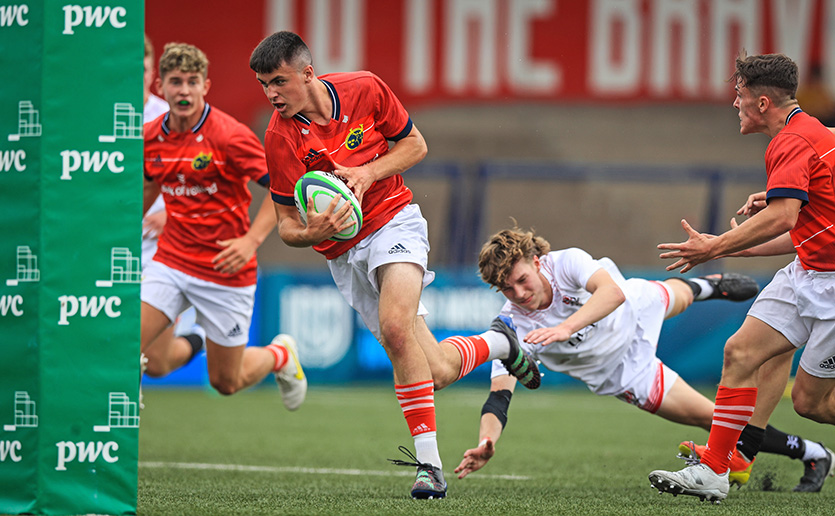 His conversion saw the deficit reduced to three points with 25 minutes remaining.

The northern province soon extended their lead to six points with a well taken penalty.

Munster then took advantage of an overlap as Ryan Delaney crossed for a try. This reduced the deficit to just one point as Hicks’ conversion just drifted wide of the posts.

Not long after, a superb carry and offload from Luke Fitzgerald sent Hicks away on a scything run and the Bantry Bay man almost repeated his earlier heroics but the ball went forward just as it was being grounded under the posts.

However, Munster secured one last chance as Eoin O’Gradaigh went over in the corner and Hicks converted brilliantly from the touchline to give Munster a 24-18 lead entering the final seconds of the game.

Munster held on to this lead by playing some smart rugby in the final moments to close out the game and the win.

Munster got off to a superb start when a delightful grubber kick saw Oisin Pepper collect and cross in the corner. Cillian O’Connor’s conversion was wide as Munster took a 5-0 lead.

Ulster responded at the midway point of the first half when a strong maul saw their hooker Zac Solomon cross for a try. Ben McFarlane’s conversion attempt came back off the post as the sides were level.

The northern province then took the lead not long after when their winger collected a chip from James McKillop to cross for a try in the corner. McFarlane’s conversion was good this time as Ulster took a 5-12 lead with just over 10 minutes remaining in the first half. 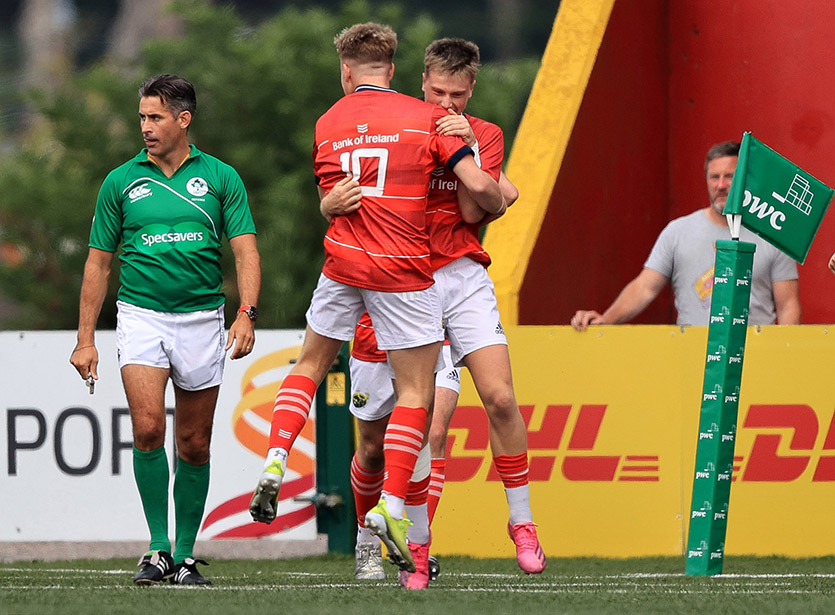 A strong maul effort from Munster saw Danny Sheahan cross for Munster’s second try and this was converted by O’Connor as the sides were tied once again as referee Frank Murphy signalled for halftime.

A lovely move off a setpiece almost saw Harry Long cross for a try but the Ardscoil Rís man was held up over the line as Ulster got the chance to clear.

A penalty from McFarlane drifted wide as the sides remained level entering the final 15 minutes.

The northern province continued to dominate possession and territory for the remainder of the game and that pressure told when Long was sent to the sinbin. Ulster had a kick at the posts as a result and McFarlane made no mistake this time as he put his side three points in front with just over three minutes remaining.

From the kick off, Munster won a penalty at the breakdown and kicked to the corner. Brendan O’Connor’s side won a penalty from the resulting maul and decided to tap and go. A number of close range carries eventually saw Jack Somers plant the ball on the line to rapturous celebrations. O’Connor landed the conversion to give Munster a 19-15 win.