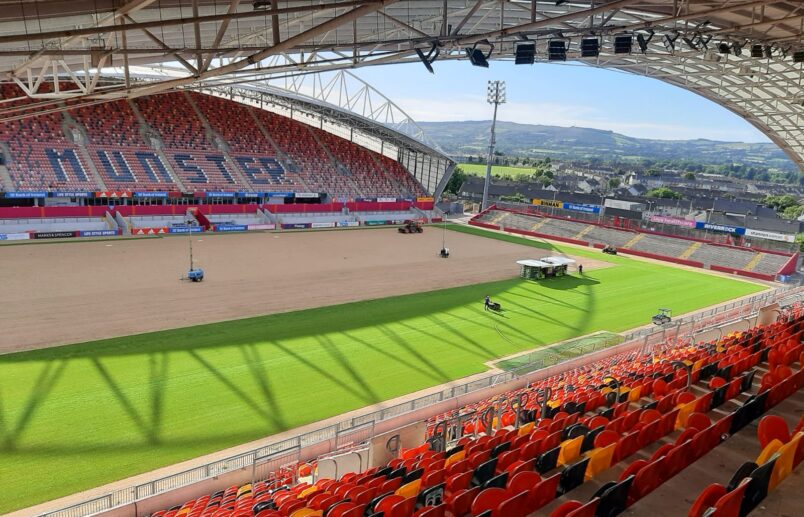 A view of the new pitch being laid at Thomond Park. Munster Rugby

Several projects are underway to improve facilities across the organisation and to meet our sustainability goals. See the latest operations update below.

The Thomond Park pitch upgrade has commenced with work well underway on the new surface. The previous pitch had been maintained for 14 years and was due to be upgraded on completion of the season. A hybrid pitch, similar to the Aviva Stadium, with reinforced turf technology is currently being installed and will be ready for the start of the new season.

Musgrave Park hosted the International Mixed Ability Rugby Tournament at the beginning of June to great success. A special note of thanks to our neighbours Sunday’s Well RFC who organised the superb event that had inclusivity and community at its very heart. Well done to the Sunday’s Well Rebels & El Salvador for winning their respective men’s and women’s World Cups. See more details here.

Thomond Park and Musgrave Park have also successfully hosted large-scale concerts of late with Aiken Promotions and MCD Productions using the respective facilities to host various artists. Over 100k attendees have made their way to the venues for several concerts with the final shows set for Musgrave Park this weekend.

The Centre of Excellence planned for Cork remains a critical part of our plans and while inflation in the construction industry has proved challenging, the hope is to commence the project in early 2023.

A new partnership with Fethard Town Park for a Regional Centre of Excellence was announced in February. The partnership will see Munster Rugby’s underage and development squads have access to state-of-the-art facilities. See full details here. We are looking to replicate this structure in other locations around the province.

On the sustainability front, we have measured the carbon footprint of the entire organisation and are working through the plan to further reduce it following on from our commitment to the UN Sport for Climate Action Framework – our commitment is to reduce our carbon footprint by 50% by 2030 and to achieve net-zero emissions by 2040. See more information here.

Many measures have been implemented already such as renewable energy at Thomond Park and Musgrave Park. New LED floodlights that are more environmentally friendly and of a higher quality than the previous lighting were installed at Thomond Park in the summer of 2021. A similar project is taking place in Musgrave Park with the new LED floodlights to be in place in early August

In further meeting our sustainability targets, solar panels will be installed at Musgrave Park and we are working closely with our partners Pinergy to complete the project this year.