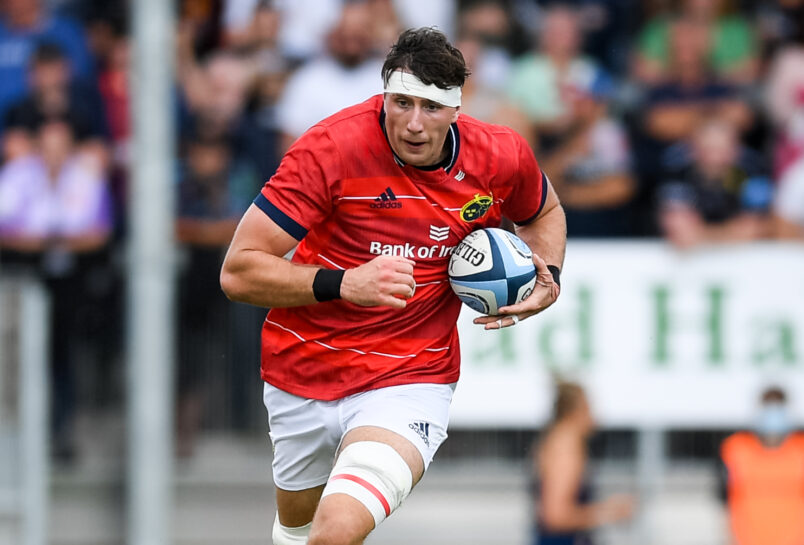 Thomas Ahern sustained a thigh injury at the weekend. Inpho

The Munster squad are on a down week following Saturday’s victory over Zebre in Parma and will be returning to the HPC next Monday to prepare for our upcoming URC game away to Glasgow Warriors on Friday, February 11 (8.15pm).

There are nine Munster players in Ireland camp for the Six Nations with full squad details here. Keith Earls (leg strain) and Joey Carbery (elbow) have both been training fully with the squad.

Academy winger Conor Phillips was in action with the Ireland Men’s Sevens team at the weekend and helped them to a four-placed finish at the World Rugby Sevens tournament in Seville, scoring three tries.

On the injury front, Thomas Ahern was removed with a thigh injury during the clash with Zebre and will undergo a scan to determine the extent of the injury.

Liam O’Connor will undergo a scan on a knee injury sustained while in AIL action with Cork Constitution at the weekend and will see a specialist later in the week for assessment.

Jack Daly is rehabilitating a shoulder injury sustained while in AIL action with Garryowen last week.

Along with O’Connor, Seán French and Alex McHenry were also in action for Cork Constitution on Saturday with French scoring the bonus-point try in a 26-15 victory over Ballynahinch.

Academy prop Mark Donnelly lined out for Garryowen in their 46-5 defeat to Lansdowne.

Senior hooker Kevin O’Byrne helped Highfield to a 19-8 triumph over Banbridge at Woodleigh Park in Division 1B.

In player news, hooker Declan Moore has linked up with Ulster on a loan deal and will be making a permanent move to the Kingspan Stadium next summer.

Irish-qualified Moore moved to Munster from Australia on a one-year contract last summer. He has made one appearance for the province to date along with lining out with Shannon in the AIL on a number of occasions.