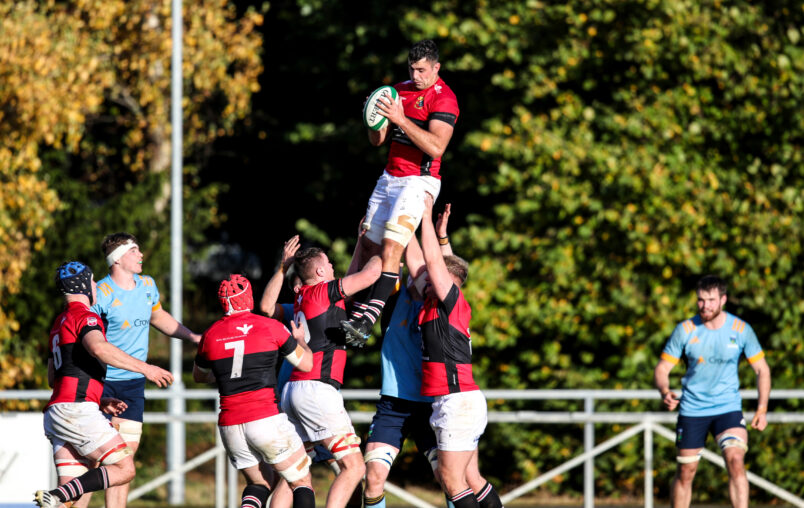 Jack O'Sullivan takes a lineout for UCC at the weekend. Inpho

The Munster squad will return to the HPC next week ahead of our two-match tour to South Africa that will see the province face the Bulls in Pretoria on Saturday, November 27, and the Lions in Johannesburg on Saturday, December 4.

10 Munster players will continue training with the Ireland squad in Dublin ahead of their opening Autumn Nations Series fixture against Japan at the Aviva Stadium this Saturday (1pm).

Thomas Ahern has departed the camp having trained with the squad as a development player last week.

There were 14 Munster players in All Ireland League action at the weekend as eight senior players and six members of the Greencore Munster Rugby Academy lined out for their clubs. Read a full round-up of the action here.

Senior players Jake Flannery, Keynan Knox and Jack O’Sullivan made their first AIL appearances of the campaign with 19 Munster players featuring for their clubs in the opening four rounds with a total of 35 appearances.

Jack Daly, Mark Donnelly and Paddy Kelly all lined out for Division 1A leaders Garryowen as they defeated Ballynahinch 27-22 in Ballymacarn Park.

Keynan Knox and Eoin O’Connor featured for fellow unbeaten side Young Munster as they defeated Lansdowne 24-20 at the Aviva Stadium.

Jack Crowley and Seán French both touched down for Cork Constitution as they defeated Dublin University 32-13 at Temple Hill with Crowley also adding a conversion.

Jack O’Sullivan, John Hodnett and Scott Buckley all started for UCC as they fell to a 40-31 defeat away to UCD with Paddy Patterson scoring two tries for the hosts.

A Shannon side featuring Jake Flannery, Daniel Okeke and Declan Moore were 32-10 winners over Old Belvedere on the back pitch at Thomond Park in Division 1B. Flannery scored two tries and added another 12 points off the tee in the victory.

42 players have been involved in matchday squads in the opening five fixtures of the United Rugby Championship, including Academy duo Alex Kendellen and Paddy Patterson.

19 Munster players have featured for their clubs in the opening four rounds of the All Ireland League with a total of 35 appearances.