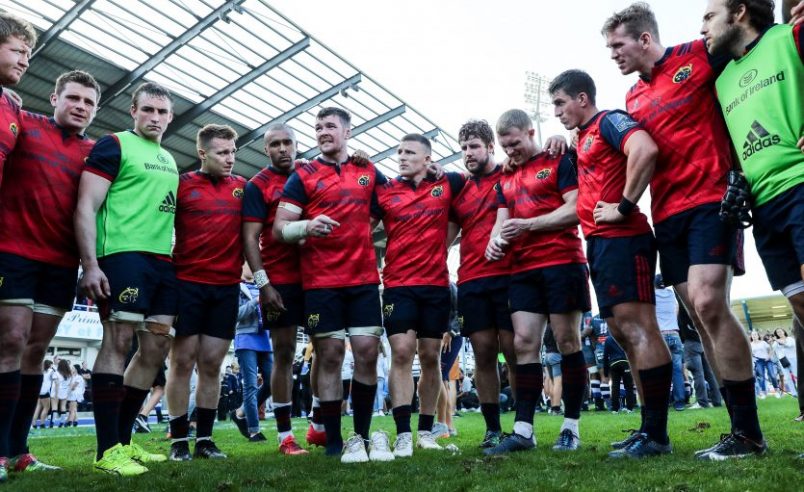 Munster reached the semi-finals of both the Guinness PRO14 and Champions Cup in the 2017/18 campaign but fell just short in their quest for silverware.

Check out the best photos from the season in our gallery here.

One point separated Munster and Leinster at the RDS as the hosts progressed to the PRO14 final thanks to a 16-15 victory last weekend while Racing 92 were 27-22 winners in Bordeaux in the Champions Cup semi-final.

Over the 31 games played over the course of the campaign across the Guinness PRO14 and Champions Cup, the province won 19, drew two and lost 10.

Munster scored 812 points, including 105 tries, over the season. The province boasted the best defensive record in the PRO14 conceding an average of 17 points per game and had the meanest defence in the Champions Cup Pool stages, conceding just eight tries in six games.

The province finished second behind Glasgow Warriors in Conference A of the Guinness PRO14 with 69 points – 13 wins, seven losses and a draw.

Munster were the third highest try-scorers in the PRO14 regular season with 78 tries in 21 games.

Munster’s Champions Cup records were extended with the province qualifying for a 17th quarter-final and 13th semi-final, both competition records.

Johann van Graan’s side also became the first side to beat Leicester in both games of the double-headers since they were introduced in 1999, the victory at Thomond Park saw the province surpass 4,000 points in the competition.

50 players were used over the course of the season with 34 of those following the Munster pathway into the professional game with five current Greencore Munster Rugby Academy members playing their part.

There were 11 debuts over the course of the campaign as Chris Cloete, Chris Farrell, Mark Flanagan, Gerbrandt Grobler, James Hart, Jeremy Loughman, Liam O’Connor, Sean O’Connor, Ciaran Parker, John Poland and Jack Stafford all made their first appearances for the province.

Ian Keatley was Munster’s top points-scorer with 174 points to his name while Alex Wootton was top try-scorer with eight. Wootton became just the second Munster player to score four tries in a PRO14 game against the Cheetahs in September, equalling Mike Mullins’ record from 2001.

In captaining Munster, O’Donoghue became the first Waterford player to lead Munster in the professional era.

For the second year in succession, Billy Holland played more minutes than anyone else as he amassed a mammoth 2,029 minutes in 27 starts with the Cork man missing just three games all season.

O’Donoghue made more appearances than any other Munster player this year as he started 18 games, made 12 appearances off the bench and missed out on just one occasion. He also showed his versatility with appearances in all three positions across the back row.

On the international front, Earls, Farrell, Conor Murray, O’Mahony, Stander and John Ryan all featured for Ireland in the 6 Nations Grand Slam success.

Farrell and Darren Sweetman made their Ireland debuts in November with Scannell making his Ireland bow in last summer’s tour of USA and Japan.

Four tries on that tour saw Earls became the first player to score nine tries for Ireland in a single season.

Niall and Rory Scannell also became the first Munster siblings to line out together in a test game for Ireland during the professional era in last June’s win over the USA.

Last summer saw three Munster men represent the British & Irish Lions in New Zealand with Murray, O’Mahony and Stander helping the Lions to a drawn series with O’Mahony captaining the side in the first Test.

Munster embarked on their first tour to South Africa in April and became the first PRO14 side to win both away games against the Southern Kings and the Cheetahs.

There were five sell-outs across the season in Thomond Park and Irish Independent Park with games against Dragons, Glasgow Warriors, Leinster, Ospreys and Toulon all full houses.

In all three of Munster’s Champions Cup Pool games, the attendances (22,054 at Munster v Racing 92, 23,503 at Munster v Leicester Tigers and 23,116 at Munster v Castres Olympique) were the highest for their round of the competition.