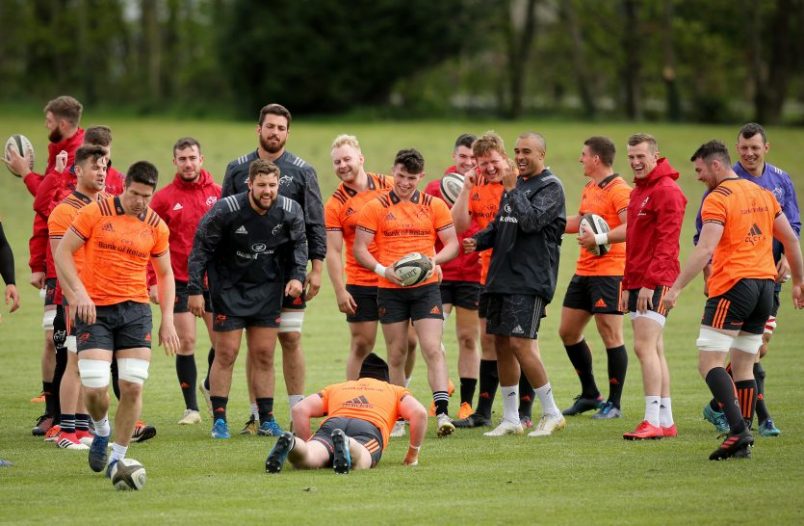 The Munster squad at training in UL on Monday.

It’s win or bust for Munster on Saturday as Edinburgh visit Thomond Park for a knockout clash in the Guinness PRO14 Final Series.

Tickets are now available for the game and kids go free if you purchase online. If you buy an adult ticket for the game, you can also order an additional four Junior tickets free of charge.

Led by Head coach Richard Cockerill, the Scottish side will travel to Limerick full of confidence after a superb season. Edinburgh’s 15 wins were matched only by Glasgow Warriors, a tally that also set a new club record for the team from Scotland’s capital.

Edinburgh have won on both of their visits to Irish provinces in 2018 and beat Munster 12-6 at Murrayfield in their only encounter this season.

The Scotsmen’s only loss in the last nine rounds of the Guinness PRO14 was a 32-20 loss at home to Ulster last month, whilst their only defeat in the Championship outside Scotland since September was at the Cheetahs in November.

The game could see the outgoing Simon Zebo, Robin Copeland and Gerbrandt Grobler play their final games for Munster.

Speaking ahead of the game, Munster Head Coach Johann van Graan said: “Certainly, we’ve got a plan and we’ll try and execute that as best we can. All we’re focused on is Saturday at quarter past three.

“They’ve got a quality coach, I think he’s one of the best coaches in the world. They’ve got a lot of belief and they’ve got a very simple plan, so I think they’ll come here with nothing to lose.

“From our side we hope we start well and apply some pressure and we hope we can put some points on the board.

“They’ve come from my perception, I won’t say from nowhere, but nobody has seen them coming and a lot of guys still don’t see them but they are a red-hot team, playing some fantastic rugby.”

CJ Stander is set to return to the side after missing last weekend’s 24-24 draw with Ulster and has been impressed by Edinburgh’s performances so far this season.

“They are a team that work hard every weekend for each other, have a big work-rate and the team stick together,” said Stander.

“(Cockerill) is a guy that coached European Cup teams, he coached Leicester and we played against them. He knows what he is doing, he hasn’t surprised me at all.”

Nigel Owens takes charge of the clash with the winners of the fixture travelling to the RDS in Dublin to play Leinster on Saturday, May 19.