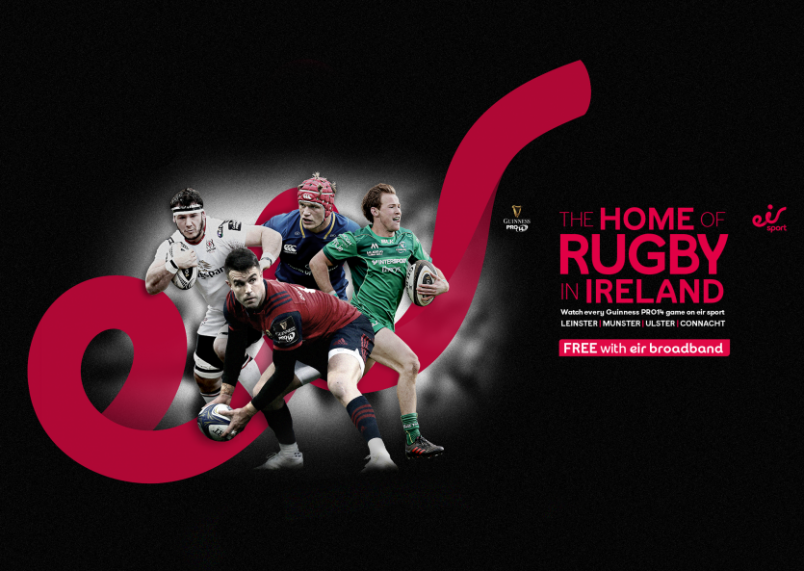 Eir sport and the Guinness PRO14 have agreed a landmark partnership to broadcast every game for the next three years from the 2018/19 season.

It’s another significant milestone in eir sport’s journey to become Ireland’s number one sports broadcaster on TV and mobile as it revolutionises the television viewing experience for rugby fans.

And it is a quantum leap for the Guinness PRO14 Championship, which continues its remarkable transformation and grows its appeal after the successful expansion into South Africa.

The partnership means that for the first time in the Republic of Ireland, rugby supporters can watch all 152 games a season of the most exciting club rugby championship in the world. This will include every Munster and Leinster game live, with the derby games between the two provinces to be broadcast exclusively live in the Republic of Ireland on the eir sport channels.

Fans can look forward to seeing over 30 hours of Guinness PRO14 related programming every week including up to six live games with pre and post-match analysis. A weekly highlights show to review and preview each round of games will also form part of the eir sport schedule.

This consolidates eir sport’s position as the home of the rugby in Ireland. The eir sport pack will be the only place to watch all of the European Champions Cup from next season, the U-20 World Championships, and will be the home of the 2019 Rugby World Cup in Japan. Ireland internationals, such as last summer’s tour of Japan and the historic win against the All Blacks in Chicago, could also only be watched on eir sport.

The Guinness PRO14 coverage on eir sport will be broadcast from a state-of-the-art studio which has recently been redeveloped. eir sport will use new faces and new technology to engage with Irish rugby supporters in fresh and innovative ways.

eir sport has entered into a sub-licencing agreement with TG4, allowing the Irish language broadcaster access to a select number of games.

Martin Anayi, CEO, PRO14 Rugby, said: “The arrival of eir sport alongside Premier Sports in the UK will be a game-changer for the Guinness PRO14. It is another bold step in raising our Championship to new levels and unlocking its vast potential.

“eir sport will take the broadcast experience of the Guinness PRO14 to levels that our fans have never seen before. We share their commitment to innovation and we know eir sport will look at our games in a brand-new light with sharp analysis backed up by savvy insights from the characters who know what it’s like to compete in our Championship.

“The bidding for broadcast rights in the Irish market showed us just how much interest there is in the Guinness PRO14 since our expansion into South Africa. eir sport’s bid was impossible to turn down due to the unprecedented support they will provide across every area of the Guinness PRO14 – on and off the pitch.

“They will champion the tournament at every turn and help spread the gospel of the Guinness PRO14 which continues to go from strength to strength with each passing season. We’re thrilled to welcome eir sport into the fold because we know they will be a partner in the truest sense of the word.”

Susan Brady, Managing Director of Consumer and Small Business commented: “This is another huge statement by eir sport and shows our long-term commitment to offer Irish sports fans the very best in terms of choice and quality.

“Sports content is a central pillar of our strategy to become Ireland’s best mobile and broadband provider. We are delighted to be able to add the Guinness PRO14 to our roster and look forward to working closely with the competition organisers to provide innovative, informative and interesting coverage.

“eir sport is the new home of rugby in Ireland with our PRO14 coverage at the heart of this along with our European Rugby Champions Cup action through BT Sport. In addition, we maintain our ongoing commitment to schools rugby in Ireland alongside women’s rugby, having broadcast every game from last summer’s Women’s Rugby World Cup.

“As we build towards our coverage of the Rugby World Cup in Japan next year, rugby fans can rest assured that eir sport will continue to deliver the very best content and the ultimate viewing experience.”

Dermot Rigley, Commercial and Marketing Director, PRO14 Rugby added: “The vision eir sport has for the Guinness PRO14 is going to smash all previous expectations for our teams and their supporters. The production standards will be like nothing ever seen before in the Guinness PRO14 with up to 10 High Definition cameras capturing the action at every game. With pitchside presentations and on-field interviews, it’s all part of eir sport’s and our goal of bringing fans closer to the game.”