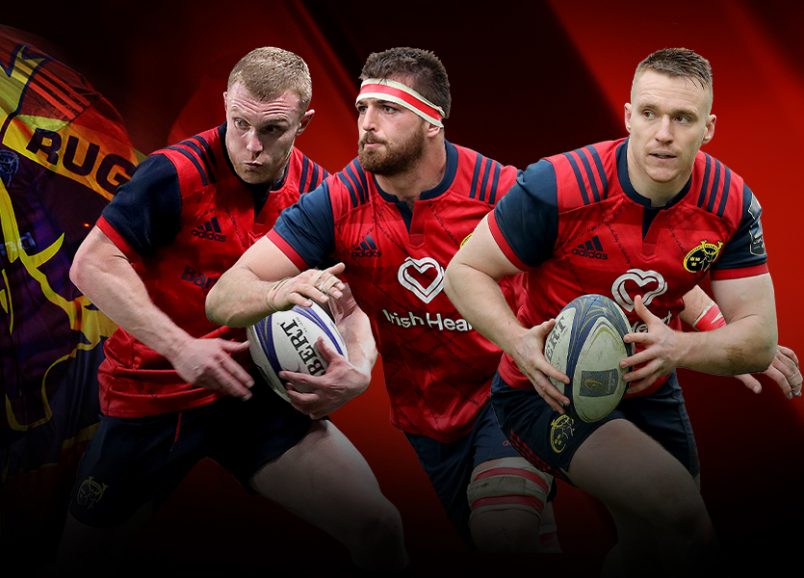 All profits raised from the event will be donated to the Irish Heart Foundation, Munster Rugby’s nominated charity for the season.

The Player of the Year nominees are Keith Earls, Jean Kleyn and Rory Scannell, all of whom were nominated by their fellow team-mates.

Earls won the Academy award in 2007 and Young Player of the Year in 2009 with Scannell winning both awards in 2016.

The overall winner will be decided by a public vote. Click here to vote via the Irish Independent website and be in with a chance to win two tickets to the Awards event.

Greencore Munster Rugby Academy players Calvin Nash, Liam O’Connor and Fineen Wycherley have been nominated for the John McCarthy Award for Academy Player of the Year.

In total, eleven diverse categories will be honoured in celebrating the best of Professional and Domestic rugby within the province.

The 30-year-old has started 8 games this campaign, playing on the wing and in the centre, and scored five tries.

In his first appearance of the season he scored a brace against Leinster at the Aviva, and has scored successively in his last 3 appearances.

The flying winger also produced a man-of-the-match performance against Castres Olympique in Thomond Park in January, while his impressive form continued during the 2018 6 Nations.

Shining on the international stage, Earls was an ever-present on the Ireland flanks playing a pivotal role in his first Grand Slam success.

Jean Kleyn has earned his first Player of the Year nomination in his second season at Munster after an outstanding campaign to date that has seen the lock become a fixture in the starting XV.

The powerful 24-year-old has started 20 of the province’s 27 games and made one appearance off the bench so far this year.

Having missed the second half of last season through injury, Kleyn started the year in brilliant form with four tries in the opening three games.

Kleyn has started Munster’s last five games in Europe and scored a try away to Racing 92 in January’s Pool defeat in Paris.

His partnership with Billy Holland in the second row has been key as Munster have earned a place in the Champions Cup semi-finals and a home semi-final qualifier in the Guinness PRO14.

Rory Scannell has been in sparkling form yet again this season with the centre consistently producing excellent performances for the province.

Having earned his first three Ireland caps on last summer’s tour of the USA and Japan, Scannell has missed just three of Munster’s 27 games so far this season.

Incredibly, the centre has played every single minute of Munster’s seven Champions Cup games to date this year.

Since establishing himself as first-choice while an Academy player in 2015, the clever midfielder has become a firm favourite among Munster supporters.

We have a very limited number of places left for the event, the package for which is listed below.

Two bottles of wine per table of 10

A raffle to win a variety of Munster Rugby prizes, with all proceeds going to the Irish Heart Foundation

To book your places at this year’s Munster Rugby Awards, please contact Craig Power on 085 2540516 or craigpower@munsterrugby.ie as soon as possible to avoid disappointment.