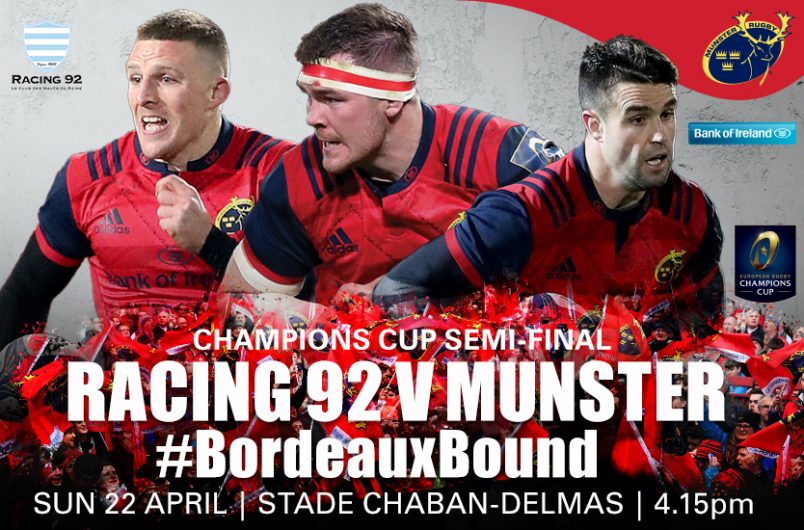 With anticipation building ahead of our Champions Cup semi-final against Racing 92 in Bordeaux on Sunday, Munster fans across the six counties are showing their support for the province.

With thousands of supporters flocking to Bordeaux at the weekend for Munster’s record 13th semi-final, town, city and county councils across the province are turning Munster red for the occasion.

Business owners and supporters are also getting behind the team by flying Munster flags and wearing red on Friday ahead of the Munster team’s departure for France from Shannon Airport on Saturday morning. The Munster Rugby Supporters Club are running a competition for fans who are showing their support with full details on their Facebook page.

Munster fans from Ireland and across Europe will be travelling to the game and the Munster Rugby Supporters Club have kindly put together the below travel guide.

The Munster Rugby Supporters Club have chosen four venues as central gathering points and negotiated reduced rates for food and refreshments over the weekend period for all supporters wearing their Munster kit at each venue.

Bordeaux-Mérignac Airport is the international airport of Bordeaux and is situated in the commune of Mérignac, 12 km west of Bordeaux. For more information around the Bordeaux airport please click here.

You can reach the city centre by taking Navette Shuttle 30′ Direct which operates every day from the airport to the main train station, Gare de Bordeaux St. Jean.

There will be taxis waiting outside the Arrivals Terminal. Make sure they have their taximeters on when you leave the airport so you don’t get overcharged. The average cost of the ride to Bordeaux is around €30.

Arriving The Day Of The Game?

There are 5 ways to get from Bordeaux Airport (BOD) to Stade Chaban Delmas by bus, tram, taxi, car or town car. Click here to get more information on these options.

Thanks for your support!