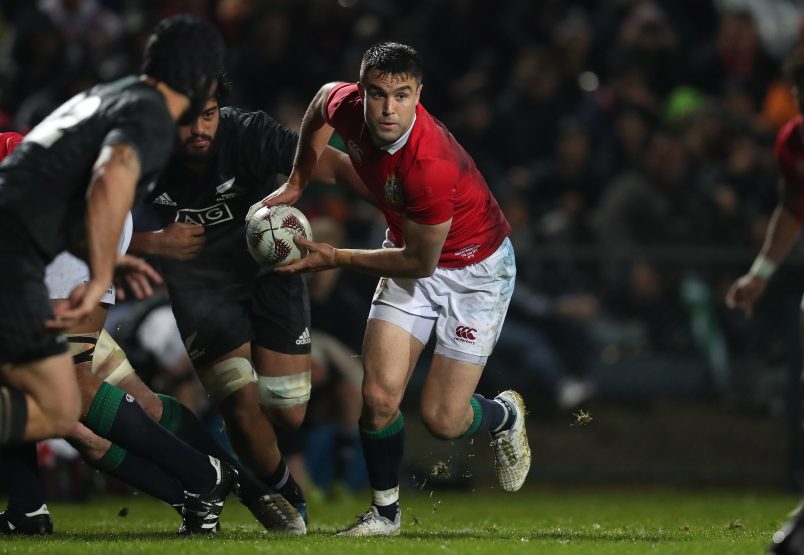 Conor Murray on the attack against the Maori All Blacks. ©INPHO/Billy Stickland

Tasting Series success with the British and Irish Lions in Australia in 2013, Munster’s Conor Murray is hungry for more as he prepares for the long awaited first Test against the All Blacks on Saturday.

Four years ago, the Patrickswell local travelled as an outside bet for the Test side, but as the Tour progressed, so did Murray, and to that end he featured off the bench in the final two Tests with Australia. Hypothetically, had there been another game, it was widely believed that Murray would have started.

Since then, Murray’s career has continued on an upward trajectory – Munster Player of the Year, IRUPA Player’s Player of the Year, starting every game in back-to-back 6 Nations titles and a starring role in Ireland’s first ever win over the All Blacks.

Hence his Lions goals are different this time around and speaking at the outset of the Tour, the scrum half was comfortable in stating publically his ambition.

“This time round I do have a different outlook on where I want to be and I think Rhys (Webb) and Greig (Laidlaw) are two really good number 9s.

“But it is going to be really tough to get into that team, just training with the lads it’s great to train with players of that calibre, there’s going to be different combinations, form is going to go up and down, hopefully your own form keeps going up and up and you can time it well coming into the Test team.”

The forerunner for the starting Test spot heading into the Series, little has changed over the past three weeks with Murray’s assured and authoritative shifts at half back helping the tourists to wins over the Crusaders and Maori All Blacks after they had stuttered in the opening two games.

Speaking after the Maori win, Murray said that the Lions are slowly but surely unlocking their full potential, and this morning’s thoroughly convincing win over The Chiefs in Hamilton suggests same.

“It’s definitely got the potential to be better than 2013.  We’re still figuring a few things out and we’ve got a massive test in the next few weeks so we’ll find out at the end of that.

“But there’s excitement there that the potential is growing and we want to see how good we are.”

It appears that the Lions are peaking at just the right time.  And they will need to do so.  The general consensus is that the best chance of a Series win against the All Blacks – in their own back yard – rests on an opening win this Saturday.

Last November, with a record 18-match sequence of Test wins, the challenge of the All Backs seemed insurmountable for most, if not all, teams.  Yet Murray and Ireland put paid to such a myth with a stunning performance in Solider Field that few will forget.

Touted by some as giving the greatest ever performance in the Irish number 9 jersey, Murray was immense that day with sharp service from breakdown, his trademark box kicking and an opportunist try around the fringes.

The try aside, all of the above have featured in his 2017 Lions repertoire to date and all will need to be on-point should he get the nod against an All Blacks side who were imperious in their 12-try demolition of Samoa on Friday.

“They obviously performed really well and sent out a big message.

“We analysed them really well, we have a really good video team and the coaches will give us good information and we’ll keep building our own game.

“We’ll obviously focus on the threats they’ll bring but we’ll keep building our squad and our game plan, and look to iron out a few creases.”

As a Munster-man, the 28 year-old is no stranger to passionate support on the road, and with the business end of the Tour fast approaching, the atmosphere is about to hit fever pitch with more and more Lions fans flocking to New Zealand by the day.

“We’ve noticed it big time.  We saw Rotorua fill up over the last couple of days and you can hear them shouting outside the hotel at night time, chanting ‘Lions, Lions.’ It’s good momentum and the buzz is good, so we’re in a good place.

“We have plenty to work on and it’s getting close to business time, which is exciting.”

Warren Gatland will name his side for the first of three Tests against the All Blacks on Thursday.