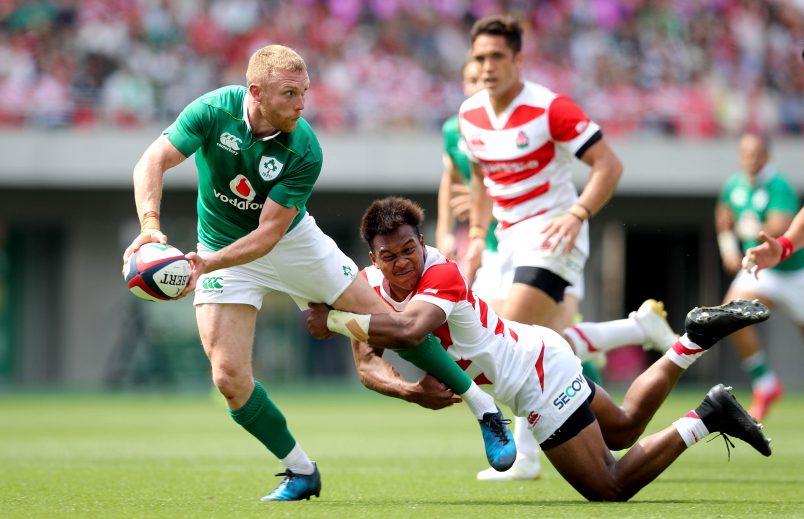 Keith Earls continues to steal the show in Ireland’s Summer Tour, setting a new record in the green jersey.  With a brace of tries against Japan bringing his Irish tally for the season to nine, the Munster winger has now scored the more tries in a season than any other Irish player in history.

His nine tries eclipse Denis Hickie’s eight from the 2002/03 campaign.

Congratulations to @KEITHEARLS87 on a record number of tries in a season for an Irish player (9). What a season he has had! #JPNvIRE pic.twitter.com/TrHInkRMbb

It’s not the first record that Earls has set in the green jersey.  Back in 2015, a touchdown against Italy saw him overtake Brian O’Driscoll in becoming Ireland’s most prolific World Cup try scorer with eight tries.  And since then he has shown no signs of slowing down, scoring a further 10 tries including back-to-back braces in his most recent outings – USA and Japan.

In total he has crossed the whitewash 26 times for Ireland.

Earls was one of eight Munster players who featured in this morning’s game including Jack O’Donoghue, Rory Scannell and Andrew Conway who all won their second caps – the latter two making their first starts.

Consequently, Rory and Niall Scannell became the fifth set of brothers to start a Test for Ireland in the modern era, following in the footsteps of the Wallaces (Richard and Paul), the Easterbys, the Bests and the Kearneys.

Earls was one of three to net a brace this morning, alongside Leinster’s Dan Leavy and Jack Conan with Garry Ringrose also dotting down.

Meanwhile the Irish medical team continue to assess Simon Zebo for a knee injury with Head Coach Joe Schmidt commenting, “Simon already had a knock on his knee, it was only a bruise, and as luck would have it he got a knock on exactly the same place on the knee. He was sore.”

Earls spoke to IrishRugby.ie after the game…