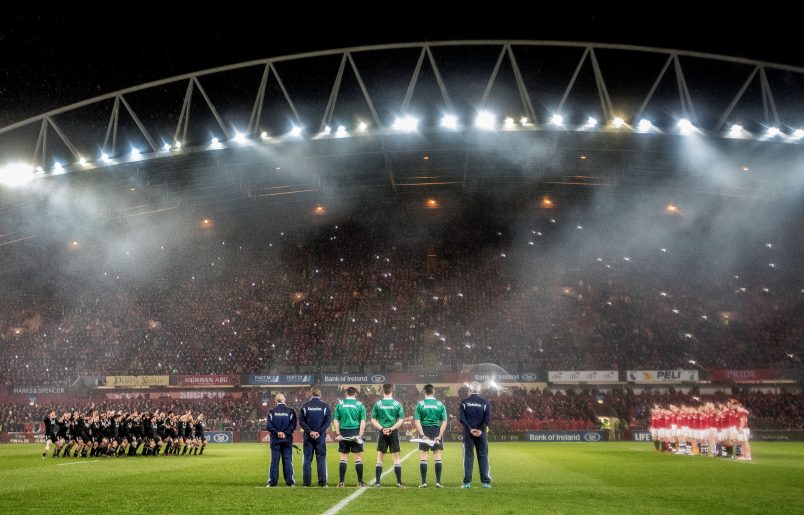 On this the eve of the British and Irish Lions’ clash with the Maori All Blacks, we look back at Munster’s historic win over the New Zealanders in November.

With win over both the USA and Harlequins, the Maori’s trip to Thomond Park became the only defeat their 2016 northern hemisphere tour.

Led by Tommy O’Donnell in his first outing as captain, and with most of their frontline internationals unavailable for selection, Munster produced a truly distinguished performance.  No less than five academy players were among those who stepped into the breach manfully – Sean O’Connor and John Foley making their debuts.

It would be O’Connor’s second win over a New Zealand side, having also featured in Ireland U20s’ win over the Baby Blacks at the World Rugby U20 Championship earlier in the year.

With Munster playing in the socks of clubs and schools from throughout the province, a thoughtful and moving Maori tribute to Anthony Foley preceded what would be an enthralling game of rugby, Niall Scannell drawing first blood before his efforts were negated by two unanswered scores from James Lowe and Ambrose Curtis.

Not panicking and feeding off the 26,200 capacity crowd, a penalty try coupled with mesmerising footwork and speed from Darren Sweetnam had Munster out in front by the interval.

Despite their best laid plans at half time, the tourists would not score again and Duncan William’s cleverly placed dink for the oncoming Ronan O’Mahony was essentially the winning of the game.

Ten of the Maori side that took to the field that night will face the Lions in Rotorua tomorrow morning, no doubt keen not to replicate the disappointment of Thomond Park.

The Lions face the Maori All Blacks at 8.35am (Irish) tomorrow morning.

Look back at what truly was history in the making.