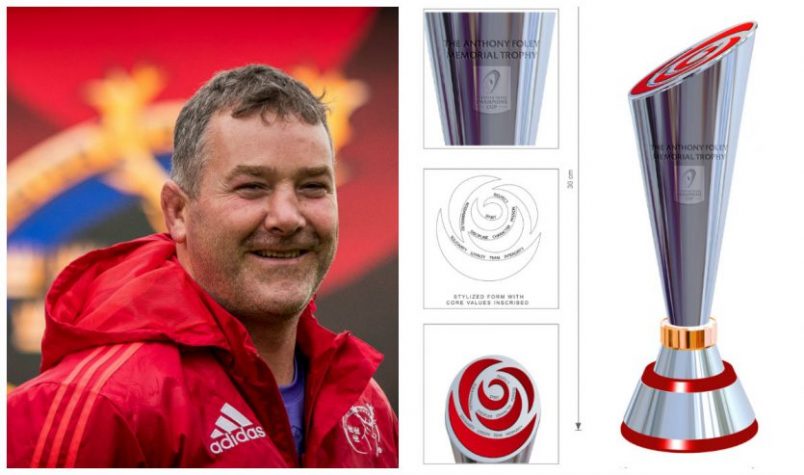 The Anthony Foley Memorial Trophy to be presented to the EPCR European Player of the Year.

As a tribute to the late Munster and Ireland legend, Anthony Foley, the EPCR European Player of the Year – presented by Turkish Airlines – will receive the Anthony Foley Memorial Trophy.

With the agreement of the Foley family and Munster Rugby, EPCR has commissioned a special trophy to honour Anthony’s major contribution to European rugby both as a player and as a coach.

The award winner will be selected by a combination of public vote and a panel of distinguished rugby experts, the player will receive the Anthony Foley Memorial Trophy in addition to a medal and one million air miles from Turkish Airlines.

An announcement will be made following today’s European Rugby Champions Cup final between ASM Clermont Auvergne and Saracens at BT Murrayfield.

It is envisaged that in future seasons, the EPCR European Player of the Year will also be presented with the Anthony Foley Memorial Trophy.

“This is a fitting way to honour Anthony’s memory. He was a great player and a great leader as well as a galvanising force in Munster’s European odyssey,” said EPCR Chairman, Simon Halliday. “I would like to thank the Foley family and Munster Rugby for allowing us create this trophy for now and for the future.”

Anthony Foley was synonymous with Munster’s compelling journey to the pinnacle of European competition. He made 86 European Cup appearances for the province, played in three finals and famously captained the side to their first final victory in 2006. To this day, he remains the province’s top try scorer in Europe with 23.

He also played 62 times for Ireland, captaining his country on three occasions, before moving into coaching and eventually taking over as Munster’s Head Coach in 2014. Anthony sadly passed away in Paris last October aged 42 just hours before Munster were due to play their first Champions Cup match of the season against Racing 92.