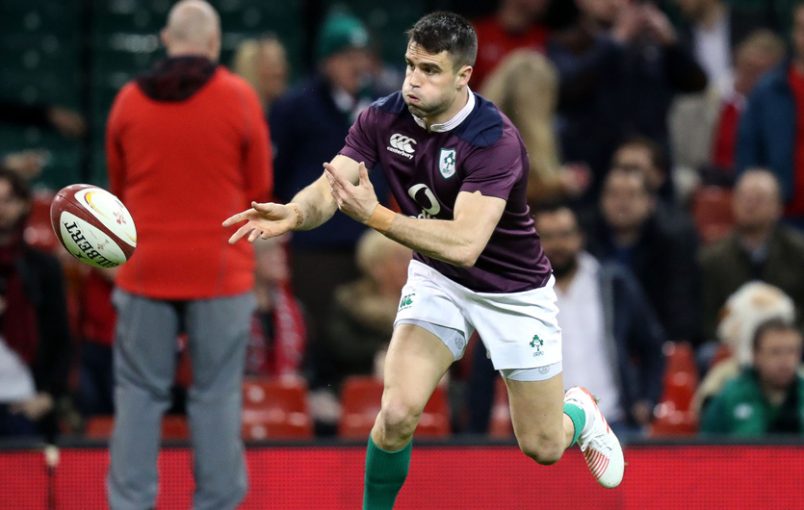 Conor Murray warms up ahead of Friday night's game with Wales in Cardiff. (c) Inpho

It was another weekend of strong representation for contracted Munster players with international, B&I Cup and AIL action all taking place.

On Friday night, a total of eight Munster players took to the field in Ireland’s 22-9 Six Nations defeat to Wales at the Principality Stadium.  CJ Stander, Donnacha Ryan, Conor Murray, Simon Zebo and Keith Earls all started with Niall Scannell, John Ryan and Peter O’Mahony featuring off the bench.

Murray left the field on 46 minutes due to a stinger in his left shoulder but is expected to be fully fit for Saturday’s final-round encounter with England at the Aviva Stadium.  Speaking today, Ireland Team Manager Paul Dean said, “Conor was fine today.  A stinger injury is peculiar. It’s a numbness that happens on the pitch. Iain Henderson had a bad one against France and recovered very, very quickly.  With Conor, he’s such a very, very good player, we gave Conor as much opportunity as we could to recover from the stinger but as you all saw, he didn’t recover completely and we had to take him off but he’s fine.”

On Saturday, 8 Munster representatives were included in the Ireland U20 side that also suffered defeat to Wales, going down 41-27.  Calvin Nash again captained the side and crossed for Ireland’s opening try with his academy colleague, Bill Johnston, adding 12 points off the tee. Joining the duo in the Ireland side were the academy’s Fineen Wycherley and Gavin Coombes, and sub-academy representatives Joey Conway, Conor Fitzgerald, Colm Hogan and Jack Stafford.

In Saturday’s Division 1A action of the AIL, the academy’s Ned Hodson and Vincent O’Brien travelled with Cork Constitution where they enjoyed a fine 20-25 away win over Lansdowne on the Aviva Stadium back pitch.

In 1B, Angus Lloyd took to the field for UL Bohs in their 18-16 win over Galwegians in UL.

On Sunday, a 26-3 win over Ulster A saw Munster A book their place in the British and Irish Cup semi finals.  Head Coach Peter Malone fielded a mixture of senior, academy and club talent.  Duncan Casey and Sam Arnold made their return to the provincial fold following knee injuries with Young Munster’s Abrie Griesel and Garryowen’s Bailey Faloon winning their first B&I Cup caps.  Click here to view the full Munster A side.

Munster A have now used a total of 40 players in the current campaign, including 17 debutants.  Malone’s charges will now have home advantage over Ealing Trailfinders in the semi final on the weekend of April 1/2.  A finalised date, kick-off time and venue will be confirmed in the coming days.