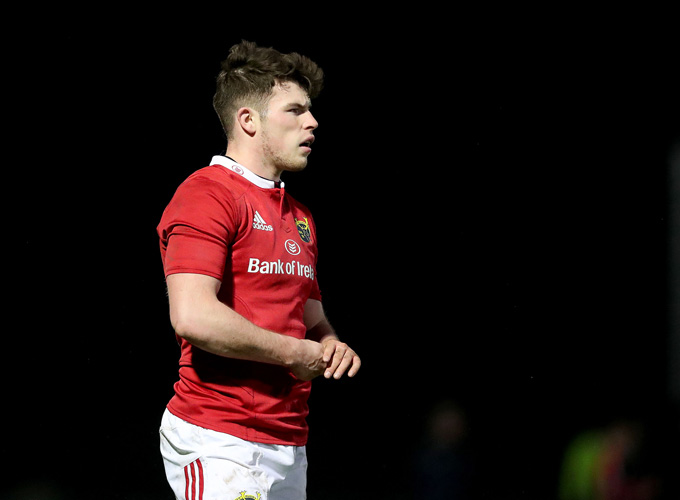 Big representation in both PRO12 and U20 6 Nations…

“It’s a very busy time for academy players and the international calendar has a knock on effect for us on both fronts. At U20 level we’ve had big representation in the 6 Nations, while at senior level, the absence of internationals sees our lads called into first team training. Be it with Ireland U20s, in senior training or in the upcoming B&I Cup quarter final (details below), there are great opportunities when the guys move up the ladder, it exposes them to another environment, a greater level of rugby, and it makes for a really exciting time in the season for all involved.

“Dan (Goggin), Brian (Scott) and Conor (Oliver) are just three examples of guys who have really stepped up in the senior setup when opportunities came their way. Their form has kept them mainly with the seniors all year, while Year One player Fineen Wycherley worked his way onto the bench for last weekend’s game against Scarlets. So doors do open for guys and Rassie, Jacques, Jerry and Felix are looking for guys to take their opportunity.

Just last weekend it was a tremendous honour for Calvin Nash to captain the Ireland U20s against France while to see Bill Johnston back in the green jersey was great also. Unfortunately Calvin took to a knock to the head that took him out of the game early on but he follows the likes of academy graduates Jack O’Donoghue and Niall Scannell in leading his country. He’s in good company there.”

“Shane Daly, Steven McMahon and Greg O’Shea have all been involved in the Sevens setup of late although Shane will miss the upcoming training camp in Alicante due to an elbow injury (further details below). We’d be hopeful that Stephen and Greg will still travel to Spain as the Sevens continue their preparation for a number of impending tournaments.”

“All such workshops are pertinent to the trade players are in. As a young player, managing finances can be a tricky thing without the right guidance and so the workshop provided them with some useful advice. It also feeds into our rounded approach of preparing guys for life both on and off the field, both in and out of rugby.”

“Calvin Nash has now begun his return to play protocols after receiving a knock to the head in Ireland U20s’ win over France.

“Rory Burke is currently being assessed for a knock to the ankle and we are awaiting word from the Munster medical team.

“Shane Daly (elbow) is due for a return in the coming fortnight while Stephen Fitzgerald (knee), Liam O’Connor (medial ligament) and Sean O’Connor (ankle) should all make a return to action this weekend.

“JP Phelan (hamstring) is on course for a return to full training next week.

“Ben Kilkenny has undergone surgery on his shoulder but is awaiting another surgery on his ankle and will do well to get back before the end of the season.”

Tickets are now on sale while entry is free for all MRSC members and 10 Year ticket holders on production of membership cards or season tickets.

Click here to see our video highlights of Munster A's pathway to the quarter finals.