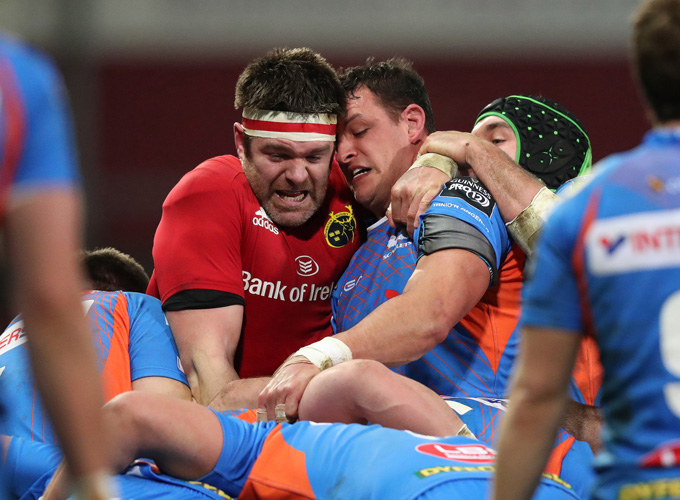 Action shots and the post-match reaction of Tyler Bleyendaal as Munster suffered their first defeat at Thomond Park since December 2015 following a huge second half comeback that saw Scarlets bag three unanswered tries.

By the interval Munster looked on course for their tenth consecutive PRO12 win, Bleyendaal controlling the game beautifully with the province crossing three times through Jaco Taute, Darren Sweetnam and Conor Oliver for a 21-6 half time lead.

There would be no further scores for the Munstermean upon the resumption however, as Scarlets did to Munster what Munster had done to Ospreys a week previous at the Liberty Stadium, mounting a huge second half comeback to hand the hosts a rare home PRO12 loss.

Reflecting on the loss, captain and man of the match Bleyendaal commented, “That ten minute period after half-time they were just on fire, we couldn't stop the momentum or stop the bleeding. We just can't give them that many chances. It was really disappointing after the first half that we had.”

Fighting to the end, Dave Kilcoyne was held up just short as Munster chased a losing bonus point at the very least, but there would be no way through for the men in red and their failure to pick up any points saw Leinster retake top spot in the PRO12 standings with Munster slipping to third.

“There was no lack of attempts. Often it was just a few execution errors. They put us under pressure and we put ourselves under pressure. To not get a score was very disappointing.

“That's what has been working for us the whole season. We take it to them, we back ourselves to get those tries and when it doesn't come off we should still be down there applying pressure.”

Next Home Game
Munster’s next game at Thomond Park sees them host European giants Toulouse on Saturday April 1st at 5.45pm in the quarter final of the European Champions Cup.