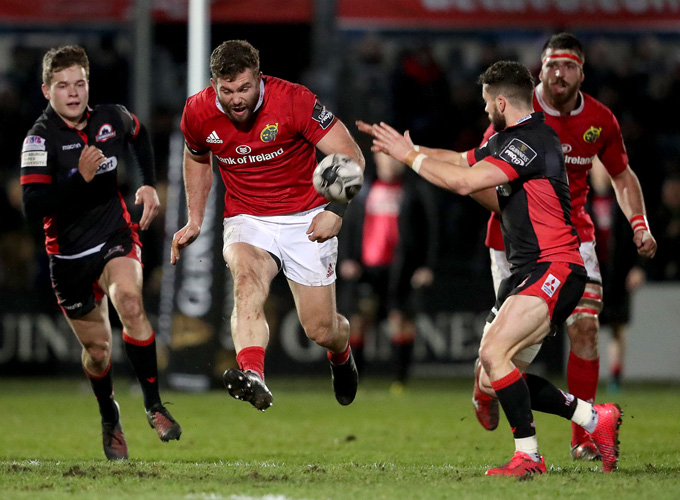 Conditions weren’t pretty and nor was the rugby for much of Friday night’s encounter with Edinburgh at Myreside. Regardless, the men in red did the necessary and secured the win that sees them return to the top of the Guinness PRO12 standings. View our match gallery here.

It was Munster who opened the scoring on 15 minutes when the season’s top try scorer, Ronan O’Mahony, pounced again. Tyler Bleyendaal, who captained Munster for the first time on Friday night, added the extra’s but that would be the province’s only score until the final quarter.

In the meantime a lack of precision – not aided by the weather – and ill-discipline allowed the hosts take charge of proceedings through three unanswered penalties from the boot of Jason Tovey.

A Bleyendaal penalty on 66 minutes eventually nudged Munster back in front but there would be one final twist that very nearly cost them the game. With the men in red slow to roll away, Edinburgh’s Blair Kinghorn saw his 51-metre attempt fall just short of the posts and Munster held on for victory.