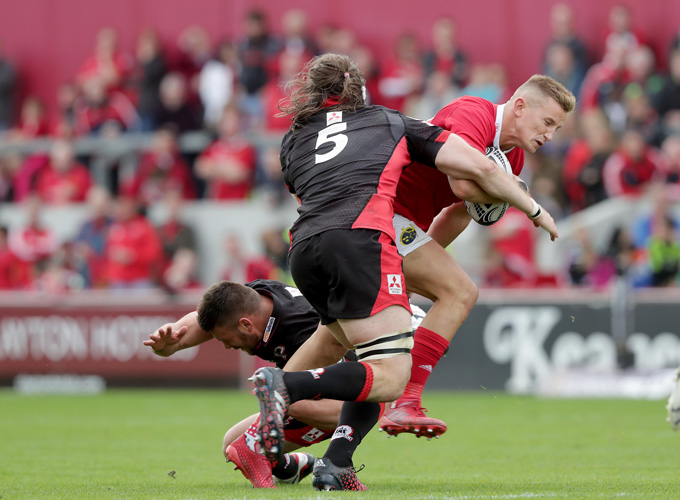 Munster return to Guinness PRO12 action this weekend in the knowledge that a win over Edinburgh would see them return to the top of the Guinness PRO12 standings. The game was postponed from January 7th to facilitate the rearrangement of Munster’s Champions Cup with Racing in Paris.

The Men in Red regrouped at the High Performance Centre in UL this week following some timely rest and recuperation. Previous to last week’s down time, Erasmus’ men had played thirteen games in fourteen weeks, losing just once – away to Leicester Tigers at Welford Road. Refreshed and rejuvenated, a somewhat different Munster side will take to the field on Friday night with no less than fourteen frontline players currently in Ireland camp. While some of the international contingent may yet be released to play this weekend, Munster will still dig deep into their squad reserves in the weeks ahead.

The province however can reap reward from good strength in depth. Emergent talent through the Munster development pathway has been complimented with a number of astute signings this season with the likes of academy talent Dan Goggin and New Zealander Rhys Marshall pushing those in front of them hard for starting berths. Both players featured in impressive wins over the Maori All Blacks at Thomond Park and away to Connacht – nights where Munster were again minus some of their household names.

Erasmus will also take confidence from the province’s recent British and Irish Cup campaign where, many of those stepping into the breach in the coming weeks, helped Munster A to four consecutive wins and a top seeding for the competition’s knock out stages.

One player in particular Edinburgh will look to keep in check is Ronan O’Mahony. Munster’s leading try scorer so far this season, the winger has scored five times in the current PRO12 campaign but feels tries will be hard to come by at Myreside on Friday.

“Edinburgh are on a rich vein of form themselves and won their last three games. Plus this is their first PRO12 game in their new stadium so they’ll be coming all guns blazing. They’ve also made the quarter final of the Challenge Cup so their confidence will be up.

“But we are confident in the depth of our squad. There’s a huge amount of talent and some of them won’t have seen a lot of game time in the red jersey so this is an opportunity for them to put their best foot forward and put their hand up with a European quarter final around the corner.”

Make no mistake, there’s plenty looking to make their mark in the Edinburgh jersey also. The Scotsmen are down eleven internationals as they look to get their PRO12 ambitions back on track. A rocky campaign to date sees them one place ahead of Treviso and Zebre at the bottom of the PRO12 standings. Head Coach Alan Solomons departed company with the club not long after their 28-14 defeat to Munster at Thomond Park in September with Duncan Hodge taking charge in the interim. A former Scotland out half, Hodge has coached his side to play some excellent attacking rugby, scoring over thirty PRO12 tries so far this season and racking up three wins on the bounce over Zebre, Timisoara Saracens and, perhaps most impressively, Harlequins at The Stoop.

In terms of their backs, Sam Hidalgo Clyne, Tom Brown and Jason Tovey have all caused Munster problems in recent encounters, while in the pack, Mangus Bradbury is another one to watch. A former Scotland 7s player and U20 captain, the back row is fast around the park and dogged at the breakdown.

Last time in the Scottish capital it took a last gasp charge-down from CJ Stander to save the win for Munster. Expect it to be just as tight this time around.

Munster have visited Myreside just once before, winning 25-22 in Pool B of the old Celtic League in August 2001.

Click here to view the Munster team to face Edinburgh.